Dutch studio XVW Architectuur has extended and renovated a supermarket near Rotterdam, adding two towers to give it a new "public face".

Designed for Albert Heijn, the largest supermarket chain in the Netherlands, XVW Architectuur aimed to make the shop a landmark within the Westwijkt neighbourhood in the city of Vlaardingen, next to Rotterdam.

"The core idea was to give the supermarket a 'public face', fitting to the cornerstone position in the neighbourhood centre," said XVW Architectuur founder Xander Vermeulen.

"The supermarket is one of the few places where people from all walks of life living in the area will come together," he told Dezeen.

"It is not an actual public building, but it is more than 'just' a shop. For many elderly and people living alone, the supermarket is one of the few places they can have a simple chat and meet people."

The studio added a corrugated steel-clad extension to the supermarket, which contains a new entrance.

A pair of towers were added to this main facade above the new and existing entrances to enhance the building's street presence.

"The aim was to make it more than just an introverted, generic 'box' with only brand-specific singing to communicate 'I am a supermarket'," explained Vermeulen.

"To us, the tower is an archetypical urban form, signifying a special place in an urban fabric," he continued.

"Like a bell tower, or a minaret. In its modest form, the towers mark the entrances to the interior street in the supermarket." 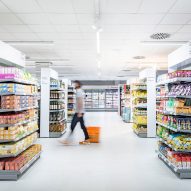 Overall Vermeulen hopes that the renovation of the supermarket will help improve the whole feel of Westwijk in Vlaardingen.

"Too often, these are seen as unimportant projects, but not only do supermarkets play a big role in people's experience of buildings, they also have a huge impact on how residential areas like Westwijk in Vlaardingen feel."

Amsterdam-based XVW Architectuur was founded by Vermeulen in 2010. The studio, along with NL Architects, won the Mies van der Rohe Award in 2017 for its renovation of a dilapidated 1960s apartment block on the edge of Amsterdam.

The photography is by Marcel van der Burg.