The show took place on 1 September during Amsterdam Fashion Week at the world's first publicly accessible art storage depot in Rotterdam, which was designed by Dutch architecture studio MVRDV.

The womenswear brand titled its show Vantage Point and looked to the setting of the art storage facility when designing its collection for the show.

Guests were seated along the walls of walkways that flank the museum's circulation spaces, which weave through the centre of the building between large glass display cases and angular concrete staircases.

Rhinestone dresses, brightly coloured tailoring and sheer tops presented across minimalist silhouettes were worn by models who appeared from behind the art storage facility's display cases.

"We view fashion through context and interaction with its surroundings," said Francon co-founder May Kaan. "Each design is defined by a lifestyle, behaviour or culture of a place or occasion."

"With its far-reaching views and different perspectives, the Depot offers a perfect vantage point to
showcase the cross-pollination between disciplines at the core of Francon's thinking," added the brand. 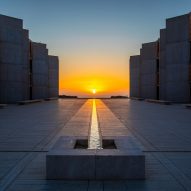 Depot Boijmans Van Beuningen was opened to the public in 2021 after it was completed in late 2020. The structure has a bowl-like form that is clad in mirrored panels and topped with trees across its roof.

The depot was billed as the "world's first publicly accessible art depot" and is host to a 151,000-piece art collection from the neighbouring Museum Boijmans Van Beuningen.

Francon explained that the brand and its collections represent a modern and iterative approach to dressing that is ultimately informed by architectural thinking.

It said that as opposed to using seasons to characterise its designs, the brand looks to settings and locations.

In 2017, Vuitton showcased its 2018 resort show at the Miho Museum in Japan, which was designed by Chinese-American architect IM Pei.

The photography is by Peter Stigter.

Amsterdam Fashion Week took place from 31 August to 4 September 2022 in Amsterdam, the Netherlands. See Dezeen Events Guide for an up-to-date list of architecture and design events taking place around the world.