HKS Architects has released plans for a plant-covered structure in the middle of Hollywood to be built for CMNTY Culture as an entertainment and tech hub.

The 500,000-square-foot (46,500-square-metre) project will form a creative campus for LA-based CMNTY Culture, an organisation founded by musician Philip Lawrence in partnership with business manager Thomas St John, which will be one of the largest Black-owned organisations in Hollywood according to the founders.

The proposed building will occupy a two-acre (0.8-hectare) site at the corner of Sunset Boulevard and Highland Avenue. It will house creative offices in order to bring together tech and media companies as well as production spaces, music studios and venues.

"Now, we live in a new era where creatives and their audiences seek opportunities to collaborate and interact, not just in the digital sphere, but in-person," said Lawrence. "Content creators need a physical epicenter, a place that celebrates their work and the power of community."

The structure itself will have two towers connected by an elevated green space.

The stepped terraces of the towers are shown full of plants in the renderings released by HKS, which worked with landscape designer Hood Design Studio for the proposal. 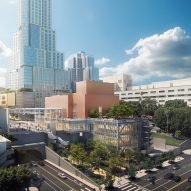 A screen of louvres made of "custom-formed" aluminum panels will drape the whole structure, swooping down from the towers to the lower elevation like a curtain.

The louvres will provide controlled shading, but also be filled with lights that will illuminate the whole structure at night.

"This will not only improve the energy model of the CMNTY Culture Campus but will also allow for lighting and media to 'broadcast' along the outer surface," HKS told Dezeen.

The main veranda of the complex which will sit between the two towers will be covered by wooden walkways with a bow-like light sculpture at one corner.

"The balconies will provide excellent shading for the southern and southwestern exposure and CMNTY Culture's outdoor spaces reinforce wellness and provide ample locations for access to fresh air and the shaded daylight around the perimeter will increase comfort of visitors and artists," said HKS.

The greenery is meant to "capture water and cool the roof".

The plant-covered terraces will also soften the stepped terraces into slopes as the two towers frame the hills outside of LA.

"It was important to keep the building lower at the corner to reflect the scale of neighboring commercial buildings and open up views to the Hollywood Hills," said HKS. 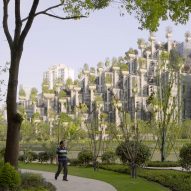 "The stepped building is meant to allow daylight to penetrate the site, and overall improve the street life and pedestrian experience in the surrounding area as well," the architects added.

Within the ground floor of the building will be many of the studio spaces as well as the 500-seat venue which can all be seen from the street.

"This was an effort to reinforce porosity at the pedestrian scale," the architects noted.

HKS was founded in Dallas, Texas, in 1939 by Harwood K Smith. The firm's recent projects include a glamping site in Joshua Tree, as well a renovation of a 120-year-old steam plant into a medical company headquarters in Toledo.

Other plant-covered buildings in the works across the world include Ole Scheeren's "hanging gardens" and a mass-timber building in Toronto by Adjaye Associates.