The three-piece Liquid Geology collection forms part of CAN's ongoing research into underutilised and unexpected materials, which here have been combined to form a coffee, dining and side table.

"We wanted the legs and table tops to be in total opposition to further amplify the qualities of each," said the studio's co-founder Mat Barnes. "The tables look to challenge ideas of comfort, taste and what contemporary furniture should look like."

All materials were chosen for maximum visual and textural contrast, with the sleek steel tops enamelled in shades of blue, green and orange before splatters in opposing colours were added by hand.

Liquid Geology's bulky timber bases, on the other hand, are coated in a fake stone material called "rubber rock" that CAN originally developed as part of an exhibition design for Sir John Soane's Museum in London.

"We wanted to create a finish that people couldn't immediately identify, to add to the surreal qualities of the surface," Barnes told Dezeen.

"We tested different mixtures and settled on rubber chippings made from recycled car tyres mixed with a flexible polyurethane resin. This proved far more lightweight than using a rough Jesmonite or sprayed concrete finish." 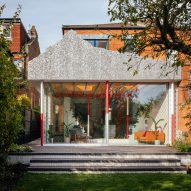 CAN adds fake mountain to Edwardian house in south London

Together, Barnes says the rubber and steel are designed to create the "otherworldly" image of a rocky deep-sea trench glimpsed through the ocean surface, cast in different hues of midnight blue and sunset orange.

"The thin, super glossy, rippling tops represent the water's surface with the thick, craggy legs growing beneath," he explained.

"During research for another project, we came across Monet's series of paintings of the Thames and Parliament, which sparked this idea of the water's surface working in opposition to its surroundings."

Liquid Geology isn't the first time that CAN has attempted to replicate natural landscapes through its designs.

Previously, the studio added a fake mountain to its founder's own Edwardian house in south London in a tribute to the Matterhorn Bobsleds ride at Disneyland.

The photography is by Felix Speller.