Designer Alexis Readinger of US studio Preen has incorporated earthy hues, wide arches and textured plaster into an Arizona eatery and bar that is part of a casino owned by a Native American community.

The restaurant, Prime, is located on the top floor of an 11-storey tower at a casino and resort complex just south of Phoenix. The site, called Wild Horse Pass, is owned by the Gila River Indian Community.

The space was designed by Preen, a Los Angeles-based studio led by hospitality designer Alexis Readinger.

Given that American casinos can often be ostentatious or kitschy, the design of Prime is meant to "challenge the traditional concept of a casino restaurant".

Readinger took cues from the surrounding landscape, which is dotted with cacti, shrubs and other vegetation found in the Sonoran Desert and the Estrella Mountains, located to the west of the site.

"The design originates with the desert and is created intentionally to frame, to view and to honor the sacred land," the designer said.

Rectangular in plan, the eatery consists of multiple dining spaces that are arranged around a central bar and lounge.

Rooms are divided by wide arches that reference those found at Arcosanti, an experimental, 1970s housing complex in the Arizona desert that was designed by architect Paolo Soleri.

In addition to the arches, the designer created a large, inverted pyramid that hovers over the main dining space. The pyramid is coated with textured "slagged plaster".

Throughout the restaurant, the team used earthy materials and colours.

In the main room, seating areas are enclosed within half-walls made of rainbow limestone – a reference to "the desert moiré of sediment, horizon and time", the designer said.

Banquettes are wrapped in ultra suede in a reddish-orange hue. Chairs from Stellar Works are made of ash and oak. 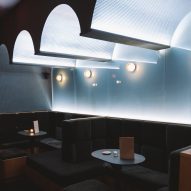 Other elements include round tables with steel edges and mirrored tops, and globe-shaped pendants by John Barlow of Lightspeed.

The globes have a finish that looks like a pockmarked moon, and are counter-weighted by long rods. "Another moment of time and suspension," the designer said.

Beyond the dining rooms, the restaurant has two waiting areas that are monochromatic. One is has an earthy red hue, while the other is a deep shade of green.

Both spaces are fitted with leather chairs designed by Preen and built by the fabricator Jecco. Small, rounded tables are from Blu Dot.

The bathroom features a vanity with a powder-coated countertop and sink basins made of glazed lava stone. Motion-activated faucets come down from the ceiling. Affixed to a wall are sconces from Rich Brilliant Willing.

The eatery also has outdoor terraces where guests can take in the scenery. One setting features iroko wood furnishings and sculptural, built-in shelving that holds an array of candles.

Other hospitality projects in Arizona include the Mountain Shadows resort, which features interiors by Mark Zeff that were inspired by desert mid-century modernism, and the Hotel Valley Ho, an iconic 1950s hotel that was brought up to date by architect Edward L Varney.

The photography is by Brandon Barré.