Emma Scully Gallery in Manhattan is showcasing the furniture of Jane Atfield, a British designer credited with one of the earliest uses of recycled plastics in furniture design.

The exhibition on the Upper East Side, which runs until 30 April 2022, features an array of reissued versions of Atfield's RCP2 chair.

The replicas of Atfield's 1992 design on show at Emma Scully Gallery were produced by Missouri-based Yemm & Hart, the original manufacturers, which uses high-density polyethylene plastic board sheets.

"I realised this new material had great potential to act as a resource for furniture, giving a second life to waste away from landfill and incineration," Atfield told Dezeen.

Atfield described an intellectual environment in the 1990s where eco-design was "somewhat marginalised".

"[S]tumbling upon the American recycled plastic sample became a really exciting opportunity and led to a decade-long research project pioneering and developing recycled plastics in the UK," she said.

Designed to showcase the material, the form of the chair is simple and functional with a speckled colour that highlights the composite nature of the polyethylene.

Having first shown the design at her 1992 graduation show at the RCA, Atfield then went on to found Made of Waste, an "agency for recycled materials".

Originally inspired by Dutch designer Gerrit Rietveld's 1923 Military Side Chair, the RCP2 has been rereleased in three colourways, including a blue version based on the model in the permanent collection at London's V&A Museum.

"With such an innovative perspective in the early 1990s, Jane's work led to the widespread use of recycled plastics throughout the industry with many designers in the subsequent 30 years working within the proactive precedent that she set," said gallerist Emma Scully.

Today, Atfield continues to be optimistic about the use of recycled materials in furniture.

"Waste is increasingly being used as a starting point, often using sophisticated processes to create sustainable and circular-minded objects," she said. 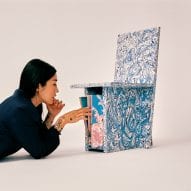 "Exciting new waste streams are being found from a multitude of sources including agricultural by-products, food waste, and industrial mining remnants," she continued. "This is full of hope, ideology, and certainly all heading in the right direction."

However, Atfield believes that these methods are only a small part of solving the waste problem, citing the "22 million pieces of furniture thrown away every year".

"Recycling is hugely beneficial but it can only take us so far," she told Dezeen, suggesting that moratoriums on virgin materials and campaigns for political awareness "rather than consumerism".

Other recent designs that use recycled materials include these sex toys made from ocean plastic and Pearson Lloyd's 3D-printed desk accessories created with bioplastic waste.

The photography is by Sean Davidson.