German car brand Mercedes-Benz has unveiled a car designed in collaboration with Virgil Abloh along with a collection of clothing designed by the late fashion designer's Off-White brand.

Named Maybach by Virgil Abloh, the car is a Mercedes-Maybach S-Class S680 model and was informed by a show car revealed last December.

The limited-edition car was designed by Abloh, before he passed away in November last year, in partnership with Mercedes-Benz' chief design officer Gorden Wagener.

Available in a limited run of 150 units, the car builds on the design of the Project Maybach concept car – a two-tone solar-powered car with a transparent hood that was also designed together with Abloh.

While the two-tone colour of the show car remains in the S-Class design, the translucent hood will not be seen on the for-sale version of the vehicle.

"As Project Maybach was a show car, we had complete creative freedom, allowing us to collaboratively concept what the future of electric travel could look like," Wagener told Dezeen.

"Due to production requirements, we had to take a different approach to the design of the Mercedes-Maybach limited-edition S-Class," he continued.

The black-and-sand colour combination used for the concept car was also used for the limited-edition S-Class.

"Project Maybach's iconic two-tone colour-way does [remain] and it is the most striking design element connecting the limited edition to Project Maybach," Wagener said.

"It is expertly carried through both the vehicle's interior and exterior," he continued.

"While the upper part of the vehicle is lacquered in a glossy obsidian black, the lower part, side flanks and special forged rims are painted in a sand hue."

The interior of the four-seater car is also designed in the same colours, with the steering wheel, doors, lower dashboard and ceiling lined in black and sand-coloured nappa leather with sand coloured decor trims and strips.

The car will be decorated with a Mercedes-Maybach and Virgil Abloh logo. 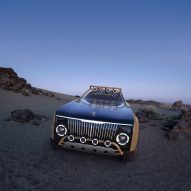 In contrast to the original show car, the for-sale Maybach by Virgil Abloh is not electric, but has a petrol engine with a WLTP combined fuel consumption of 14.3-13.4 litres per 100 kilometres.

The car brand is set to launch its first fully-electric car for retail next year.

"Mercedes-Maybach is fully committed to an electric future and, whilst Maybach by Virgil Abloh is a very limited edition run that launches before this capability is offered, we will be bringing the first fully electric Mercedes-Maybach model to the markets in 2023," Wagener explained.

According to the designer, the brand always intended to create a for-sale version of the concept car.

"Offering a purchasable element was key to the second Maybach collaboration with Virgil and the intention was always to offer our customers an unrivalled luxury design experience through the Mercedes-Maybach S-Class and capsule collection created together with Virgil in 2021," he said.

"With this unveiling we bring to Mercedes-Maybach a completely unique legacy car."

As well as the car itself, Mercedes-Benz collaborated with Abloh's brand Off-White on a capsule collection that was also designed by Abloh.

This comprises pieces in the same colours as the car, including sand-coloured cotton t-shirts and cotton fleece crewnecks, hoodies, canvas baseball caps and racing gloves in canvas, neoprene and suede, which have been coated with a black spray effect and embroidered.

Working with Abloh helped redefine the possibilities for fashion and car collaborations, according to Wagener.

"Virgil was a creative that all of us here at Mercedes-Benz hugely admired," Wagener said.

"Between the innovations possible within the Mercedes-Benz teams and Virgil's unique capacity as a cultural visionary, the opportunity was really to redefine what a fashion and automotive collaboration could look like," he added.

"Virgil was a huge car enthusiast, and he brought in interesting new perspectives; a 'question everything' approach, which he will most definitely be remembered for."

People who purchase the limited-edition S-Class will be given a custom-made wooden box covered containing a 1/18 scale replica of the limited-edition car, the two car keys and a carabiner hook, as well as a special car cover featuring the Mercedes-Maybach and Virgil Abloh logo. 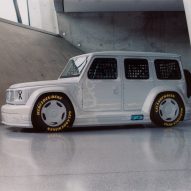 The brand previously also worked with Abloh on the design of Project Geländewagen, a conceptual race-car version of Mercedes-Benz' G-Class, a four-wheel drive luxury SUV.

Abloh passed away at the age of 41 in November last year from an aggressive form of cancer. The designer, who was artistic director of Louis Vuitton's menswear collection, was remembered by artists and creatives including David Adjaye and Dong-Ping Wong.

His final collection for Louis Vuitton was designed as an ode to his eight previous shows for the brand.