The late designer Virgil Abloh had to work hard to convince Italian design brand Alessi he could make the switch from fashion to industrial design, according to company director Alberto Alessi.

Alessi has launched a cutlery set called Occasional Object, which is one of the last projects Abloh designed with his studio Alaska Alaska before his death in November 2021.

Alberto Alessi told Dezeen he was initially apprehensive about working with the American designer, as Alessi's previous collaborations with fashion designers had all been unsuccessful.

He said that Abloh had to convince him that he was serious about adopting an industrial design approach.

"He told us he wanted to do real industrial design, not just just something fashion," Alberto said.

"I have to confess I wasn't sure at first; fashion is a completely different discipline," he stated. "But he was interested in the challenge so in the end we decided to give it a try."

Unveiled as part of Alessi 100-001, an exhibition at Milan design week, the Occasional Object cutlery set consists of a knife, fork and spoon, plus a carabiner that allows them to be clipped together.

The design allows the stainless-steel pieces to be combined in different ways; they can be used to create alternative table settings, or attached to clothing or accessories and worn on the body.

"[Abloh] had this idea of Alessi as a mechanical workshop," said Alessi. "His concept was to identify the basic tools of a workshop with homeware."

The design is a distinct departure from other cutlery sets in Alessi's collections, which includes works by the likes of Ettore Sottsass, Jasper Morrison and Achille Castiglioni.

Unlike those designs, Occasional Object has a lightweight, utilitarian style. It was designed to be more practical than comfortable, for instance, for use when camping or on the move.

Alberto admits his initial reaction to the concept was one of "confusion and concern", but that he enjoyed being challenged by Abloh.

"The approach was completely different from what we are used to," he said. "But I realised that a project where everything is clear to me from the start is probably not a very exciting project." 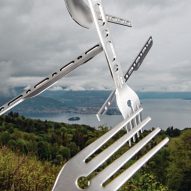 "I need something that troubles me," he explained. "If I do not understand a project when I receive it, it means it has some new elements which, wrong or right, could contribute to the evolution of the typology."

"I had to understand my fear, what is was and how to adapt to it," he said.

Occasional Object was one of seven Virgil Abloh designs that launched during Milan design week. The designer also worked with Cassina on a multi-use furniture piece, while his brand Off-White launched its fourth homeware collection.

To celebrate the project, Alessi created an installation with each piece set against a three-dimensional green-screen-style backdrop. An accompanying Instagram filter allowed users to digitally alter their setting.

The brand will roll out more products by Abloh and Alaska Alaska later this year, in a collection called Conversational Objects, and will also release an Abloh redesign of an Alessi classic.

Alessi said he is grateful the collaboration was able to take place, even though they didn't have very long to develop it.

"I regret that we didn't have enough time to do a complete family of products," he said. "We had several other ideas to develop together, which in the end he couldn't. We're glad we have the one collection."