London mayor Sadiq Khan is reviewing his decision not to stop the controversial demolition of Marks & Spencer's flagship store on Oxford Street following new guidance on embodied carbon for developments in the city.

The mayor's office, which chose not to intervene in the planned development in early March, is now reviewing its decision after it published new planning guidance on whole-life cycle carbon assessments.

"Following its initial report, City Hall has since published new guidance on carbon emissions and officials are considering an updated report to include further analysis of the carbon emissions of the proposed demolition," said a spokesperson for the mayor of London.

The new guidance requires developments that are of "potential strategic importance" to London to submit a whole life-cycle carbon (WLC) assessment. 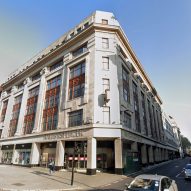 It also encourages retrofitting of existing buildings instead of demolition and promotes the use of recycled or repurposed materials.

"Retaining existing built structures for reuse and retrofit, in part or as a whole, should be prioritised before considering substantial demolition, as this is typically the lowest-carbon option," the guidance says.

The City of Westminster approved plans by Marks & Spencer (M&S) to tear down its art deco flagship store and replace it with a new building designed by UK studio Pilbrow & Partners last November.

Despite widespread condemnation of the plans both on heritage and embodied-carbon grounds, London mayor Khan initially decided on 7 March not to intervene.

This decision was recently criticised by Simon Sturgis, who co-authored the new guidance on WLC assessments for the mayor.

"It seems the mayor isn't really serious about achieving the climate goals he's set out or net-zero by 2050," Sturgis told UK architecture magazine the Architects' Journal.

"Given the climate crisis and the need to change direction [on development and construction], many local authorities say they want to achieve net-zero faster than central government. But they simply aren’t delivering on that. This is business as usual."

The scheme would reportedly waste the embodied carbon of the existing building and generate an additional 39,500 tonnes of CO2 emissions.

To compensate for the project's carbon footprint, the retailer will buy £1.2 million worth of offsets from Westminster City Council, which will be spent on encouraging carbon savings within the borough.

According to the mayor's office, this was taken into consideration in its initial assessment, but it will now reassess the decision in line with its latest guidance.

"The initial assessment of the plans by City Hall thoroughly considered the issue of carbon emissions," said a spokesperson for the mayor of London.

"This found that the carbon saving of the refurbishment of the existing building would be countered by its poor energy efficiency, and the refurbished buildings would have a larger total carbon footprint than a new build."

These findings are supported by a preliminary carbon report for the project that was undertaken by engineering firm Arup for Pilbrow & Partners. 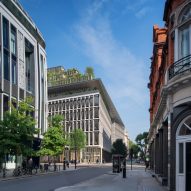 While the new build has a higher embodied carbon footprint from materials and construction, it makes up for this "within between nine and 16 years" through its superior operational performance, founding partner Fred Pilbrow claimed in an interview with Dezeen.

"Following its initial report, City Hall has since published new guidance on carbon emissions and officials are considering an updated report to include further analysis of the carbon emissions of the proposed demolition," the spokesperson said.

Decision to be determined by Westminster City Council

Although the mayor’s office could still intervene, it made clear that at present the decision remains with Westminster City Council.

"City Hall officials have not yet determined a sound planning basis for the mayor to intervene in this decision, and have said it is for Westminster City Council to determine the application," said a spokesperson for the mayor of London.

"The planning process is still ongoing, with the City of Westminster yet to issue its planning decision."

Khan has been mayor of London since 2016. In an exclusive interview with Dezeen last year he said he wanted to make London "the greenest city in the world".