Display screens that roll up into speakers, digital room dividers and transparent OLED screens that integrate into furniture are among the finalists in Dezeen and LG Display's OLEDs Go! competition.

The five finalists were selected by the competition jury out of a shortlist of 20 designs, which were published on Dezeen last month. The shortlist was selected from over 300 entries from more than 50 countries around the world. 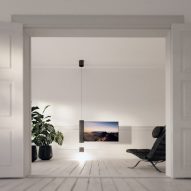 "It was very difficult to select 20 designs for the shortlist and even harder to choose five finalists as the quality of entries was so high," said Dezeen chief content officer and jury member Benedict Hobson.

"The top five selected designs all approached the brief in interesting ways but are practical too – they are all designs the judges could picture in people's actual homes."

Among the top five designs is Totem by Japan-based Studio Booboon, which combines a rollable OLED screen with a freestanding soundbar.

The design is intended to seamlessly integrate into modern homes and is characterised by its minimal footprint, which allows users to maximise space.

The highly customisable design showcases the flexible characteristics of OLEDs: the screen can be configured to sit vertically or horizontally and can be adjusted to varying heights and angles.

In its portrait mode, it can be used for social media and phone mirroring, while its landscape mode is designed to offer an enhanced viewing of standard media. When the screen is fully retracted, the device operates as a standalone speaker.

"Totem is a single device that, through its flexibility, allows for a range of interfaces and uses."

Another design that aims to save space in contemporary homes is Easel by South Korea-based designers Hyeona Kim and WooSeok Lee.

Designed to be easily folded away when not in use, Easel is a 43-inch portable display supported by a slender, collapsible frame that takes its form from an artist's easel.

The design highlights the thinness and lightweight characteristics of OLED displays and is designed to be easily transported throughout the home, from living rooms to balconies.

When not in use, the screen can be switched to a transparent mode so the frame can be used as a hanging rack for magazines or accessories, further blending in with its surroundings.

"The design of Easel focuses on creating harmony with our interiors," said the designers. "We need products that can be set up anywhere, that can change a specific space to match our personal requirements."

"The goal was to design a portable display that can be used everywhere in the home, even on the balcony or front deck," they added.

Turkish designer Cagatay Afsar's Caelum design is one that responds to the change in lifestyles brought on by the pandemic.

Since our work desks have become a central object in our homes, Afsar set out to create a desk that makes use of the transparent feature of OLEDs to prevent a monotonous working experience, allowing users a glimpse into their surroundings.

Afsar's minimal approach means the screen is fitted within the desk, which creates ample work space and reduces clutter on the desktop. When focused work is required, Caelum can be equipped with panels that curve around the desk to reduce noise and aid concentration.

Caelum can equally be used within office environments. The transparent feature of the screen enables colleagues to view each other and make conversation while maintaining a safe distance when restrictions are required.

"Our desk has become the most important object in our home and we have started to spend most of our lives here," said Afsar.

"So why shouldn't this table, where we spend so much time, be more technological and stylish?"

Another of the top five designs that makes use of the possibility for OLED screens to be transparent when they're not in use is Vivid by Studio WA+CH. The studio has designed a movable screen that can be used as a whiteboard, room divider or a video conferencing device.

The designers intended to create a multipurpose object for office or home working that doubles as a functional tool and acts as an interior decoration.

Vivid features a transparent OLED screen that can be used as a digital whiteboard, is fitted with a camera for video conferencing and can be connected to multiple screens to create a room divider. The screens are equipped with wheels that enable easy transportation.

When the screen is in standby mode, it can display imagery of plants or other decorative patterns to suit its surroundings. The screen can be used for entertainment activities such as video gaming and social media or can be used for fitness and health programmes such as yoga or aerobics.

"Vivid is a smart screen designed for home workers to help introduce parts of the office scene into the home space," said the designers.

"Its interactive design allows users to create a synchronised collaborative environment in different locations at the same time."

Another design that makes use of the flexibility of OLED technology is Tiny by Turkish designer Damla Aras, which features screens that roll up into more compact forms to allow users to declutter and maximise space on their work desks.

Tiny is composed of a 32-inch rollable OLED screen embedded into a foldable desk that can be mounted to a wall or rest on a stand. When the desk is closed, it doubles as a shelf where decorative items can be displayed.

"Tiny brings a new perspective to the relationship between TVs and work/study," said Aras.

"The idea of Tiny derived from a new way of living, to create an easy flow between living and working."

The five finalists were selected by the jury ahead of 15 other shortlisted designs, which included displays that fold into lamps and cabinets with digital displays for doors.