Kyiv practice Balbek Bureau has analysed refugee settlements around the world to develop a blueprint for a modular village that could provide emergency shelter for people made homeless during the war in Ukraine.

The housing scheme, dubbed Re:Ukraine, is based on a standardised timber-framed box that can be fitted with different interiors to form living quarters and communal kitchens, bathrooms and public spaces.

These units could be stacked and combined into larger configurations, interspersed with squares and green spaces, to create everything from a 100-person settlement up to the equivalent of a small town housing 8,200 people.

Balbek Bureau designed the template to balance residents' need for comfort and social interaction in the face of violent conflict with the urgent need to house the people displaced by "the worst humanitarian crisis in Europe since world war two," the studio said.

"The main task we set ourselves was to maintain a dignified way of life," explained the studio's founder Slava Balbek. "You can take away people's homes, unfortunately, but not their dignity."

"Time is playing against us, so it is important to find the best and fastest way to build," he added. "Imagine a family that has to spend another day, another week behind a curtain in a school gym equipped for 500 people."

Russia's war on Ukraine has so far damaged or levelled at least 30 listed heritage buildings and more than 4,600 homes.

As locals flee violence and destruction, an estimated 6.5 million people have been internally displaced – on top of the 3.2 million that have already left the country.

Balbek Bureau assembled a team of architects, designers and engineers in its Kyiv studio in a bid to determine the best way to house this flood of people while damaged houses are repaired and new ones constructed.

The team combed through existing examples of refugee housing, including modular shelters such as Exo pods and more than 20 temporary settlements in different countries from Germany to Switzerland.

"In this way, a system of values ​​and priorities was established to ensure temporary but dignified living for Ukrainians," said Balbek. "All of last week, a team of 10 people was working 24/7 on this system."

The resulting blueprint was designed to be as flexible as possible in order to accommodate changing needs, locations and budgets, as well as growing numbers of refugees. 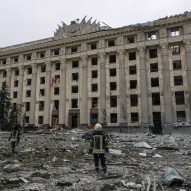 The scheme relies on an interchangeable standardised module that consists of a wooden frame, oriented strand board walls and asphalt roll roofing, which altogether would cost around $350 to $550 per square metre to produce.

These are "the main building materials that our country can extract and produce in sufficient quantities", Balbek Bureau said, without needing specialist knowledge or equipment to assemble them.

No matter if used as a residential block or a kitchen, each unit has the same footprint of around three by seven metres.

But Balbek Bureau has developed templates for how these modules can be combined into six different types of self-sufficient units, each housing at least one kitchen, one bathroom and one public space such as a common room, community centre or square.

"Socialising, especially in the new environment, has a positive effect on people's psychological state," the studio said. "The ability to make new friends, to be together among their own strengthens mental health."

Balbek Bureau has also modelled how these blueprints could be scaled up into larger quarters and settlements of over 8,200 people without needing to make structural changes to the original modules.

Now, the studio is presenting the scheme to representatives of both the public and private sector, with the aim of creating a pilot village in western Ukraine.

"It is faster to set up such a pilot village in Ukraine than wherever else due to additional regulations in Europe," Balbek Bureau told Dezeen.

Balbek Bureau is an architecture and interior design studio based in Kyiv, which has previously completed a number of projects in the Ukrainian capital including a gender-neutral beauty salon and the office of software company Grammarly.

The studio was among a number of local architects and designers that shared their experiences with Dezeen in the early days of the war, revealing how several members of its team have taken up arms to defend their country while others have relocated to safety to work on international projects.