A community housing model anchored by childcare and ideas for rural co-living that tackle loneliness and affordability are among the three finalists of the second annual Davidson Prize.

Established in memory of British architect Alan Davidson, the Davidson Prize is an award for "recognising transformative architecture of the home".  The 2022 edition is themed Co-Living – A New Future.

This year's three finalists, chosen from a 14-strong shortlist, are Co-Living in the Countryside by Charles Holland Architects, Communiversity by Moebius Studio and It Takes a Village by Child-Hood.

Each project responds to the award brief that questions whether co-living models can help tackle an "epidemic" of loneliness in the UK and whether our current notions of home are congruent with the 21st century.

Co-Living in the Countryside is a proposal for cohabiting in rural communities. The project centres around a cooperatively owned space where resources are shared, wellbeing is valued and reliance on car ownership is minimised.

The Communiversity proposal seeks to spread information about co-living to those interested in pursuing it by transforming empty offices and commercial spaces into a campus for sharing knowledge and resources. 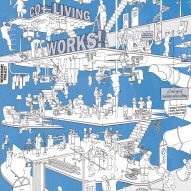 The third project named as a Davidson Prize finalist is It Takes a Village. Designed by Child-Hood, it acknowledges the importance of affordable childcare in sustaining communities and proposes an urban model that places this at its core.

Nature-focused play and social infrastructure are the main focus of the model, alongside green spaces, accessible nurseries and housing that accommodates families of "many shapes and sizes".

Discussing the final three projects, Verghese said that "the proposals from the three finalists showcase the breadth of ideas presented spanning the urban and the rural, from grassroots initiatives to new institutional models".

"It will be exciting to see how these three concepts will be brought to life in the next stage as they each reveal how the home can be transformed into a collective and collaborative space in the future," Verghese continued.

For the prize's last stage, each finalist will be given £5,000 to develop their ideas further and create a two-minute-long visual media presentation to explain them. The winner of The Davidson Prize will be announced in June during the London Festival of Architecture and will be awarded £10,000 as a result.

Unlike the award's inaugural year, this prize also ran a People's Choice Award. The winner of this public vote will also be revealed at the ceremony in June.

Co-living projects have been popping up around the world in recent years. We rounded up seven of these projects featured in Frearson's recent book All Together Now, which is a design guide to shared living spaces co-authored with interior designer Naomi Cleaver.

The images are courtesy of The Davidson Prize.