American designer Kelly Wearstler has refurbished a pool for a suite in the Downtown LA Proper Hotel, which opened earlier this year.

As part of her studio's extensive refurbishment of the building, Wearstler took the 35-foot (10.6-metre) pool from its previous use as a YWCA and turned it into a feature for the Pool Suite on the seventh floor.

With Omgivning as the project architect, the 2,777-square-foot (258-square-metre) room is one of 148 that she renovated for the launch of the hotel in February 2022. It is the only location in the Proper Hotel group chain thats feature an in-suite swimming pool.

The room's interior takes art deco influences from the club that the building was originally designed for in the 1920s.

"During our initial research into the landmark building, we discovered this pool room originally shared a floor plate with guest rooms and so thought it would be a novel idea to transform it into an iconic suite with a private pool," said Wearstler.

Over the pool is an ivory ceramic mirror mural that covers the whole wall, created by artist Ben Medansky, who also worked with Wearstler on the Proper hotel in Santa Monica.

"It was important to me to avoid a repeating pattern and instead treat each tile as its own canvas – no two are exactly alike," said Medansky.

"I drew inspiration from my Los Angeles-to-Arizona road trips over the years, and incorporated motifs of tire treads, traffic signs, and cacti, which were then minimized, abstracted, and put back together in a puzzle formation."

In the pool room, there is also an expressive wooden statue that sits in front of a window that naturally illuminated the space. Against the mosaic, Wearstler has placed a thin black metal bench.

The floors surrounding the pool comprise multicoloured marble tiles – contributing to the 136 unique types of tile used across the hotel. 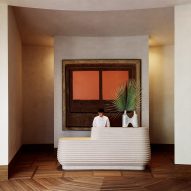 A small lounge area with pink chairs by Michael Felix is placed in the entryway that separates the pool from the rest of the suite.

The pool deck leads into an open kitchen, with similarly tiled floors and pink plaster walls by Studio One Plaster.

A marble backsplash, custom millwork made with light wood, and an island with Lostine barstools also feature in this space.

Meanwhile, a small dining table is accompanied by a set of Kelly Wearstler Martel Chairs.

The bathroom was lined with bronze and black tile made in house by Wearstler's team.

The LA-based designer is also behind a third Proper hotel in California, located in San Francisco and featuring an as the "eclectic" interior filled with vintage and European furniture.

The photography is by The Ingalls.