British architecture studio AL_A is designing a concert hall in Belgrade, Serbia, covered in a draped canopy that aims to mirror the movement of music.

The concert hall will be comprised of four curved volumes that will house a 1,600-seat performance hall, a podium stage, a recital hall and a creative hub.

Hailed as the first venue of its kind in the Balkans, the concert hall will be designed by AL_A, which is led by architect Amanda Levete.

It will be built on a site in Ušće Park, close to where the Sava and Danube rivers meet in Belgrade.

Its four light-hued volumes will encircle a central space that will be covered by a draped canopy that extends from the surrounding venues.

"Through this arrangement, we [will] create a building with no front and no back resulting in an architectural panorama," said AL_A.

"The building speaks to the movement of music through this expressive form." 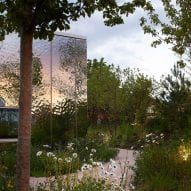 According to the firm, the Belgrade Philharmonic Concert Hall's parkland and riverside settings influenced its design, which intends to blend nature with architecture.

A range of music genres will be explored and performed in each of the concert hall's venues in the hope of attracting audiences of varying ages and cultures.

"The materiality of [the building's] envelope will create a rippling effect that mirrors the dappled waters of the River Danube, reflecting the changing landscape through the seasons, and signalling a new moment of culture," added the architecture studio.

AL_A won the proposal to design the project, which was awarded by The United Nations Development Programme (UNDP), following a year-long competition in which 37 applications were received from architecture firms in 15 countries.

The competition was launched in 2021 on behalf of Serbia's prime minister and government, the country's Ministry of Culture and Information and the Belgrade Philharmonic Orchestra.

Founded by Levete in 2009, AL_A has recently designed two buildings wrapped in etched glass and anodised aluminium at the University of Oxford and the world's first magnetised fusion power station.

The images are courtesy of AL_A.