Architects and designers should aim to have a positive impact on the environment, rather than just trying to minimise the damage they cause, according to Katie Treggiden, who returns as Dezeen Awards sustainability head judge for the second year running.

"We are looking for projects that actively do good," said Treggiden, who will oversee the judging of the three Dezeen Awards sustainability categories, which reward the buildings, interiors and products that strive to have a positive impact on the planet.

"It's not enough anymore to simply do less harm," she continued. "As a species, we must start putting right the damage we have done."

"Progress is so much more important than perfection"

Treggiden will be joined by seven other sustainability experts to form the jury for the sustainability categories. Their names will be announced in the coming weeks.

According to Treggiden, the jury will be looking for entries that are honest about the impact they are having.

"We are looking for transparency," she said. "The environmental movement doesn't need a few people doing this stuff perfectly, we need everybody doing it imperfectly, so we want people to be honest about where they are making progress and where they still have work to do."

"Progress is so much more important than perfection," she added.

"There has been an increase in greenwashing"

Treggiden believes that transparency is essential to avoid and help uncover greenwashing – false marketing usually undertaken by large companies to appear to be sustainable, when in fact standards are not being met – which she says is increasing.

"Sadly, there has been an increase in greenwashing as clients and consumers demand more environmental consideration from the people they spend money with and brands scramble to appear to be meeting that need, rather than actually addressing it," she said.

According to Treggiden, awards programmes such as Dezeen Awards can play an important role in affecting positive change.

"I would encourage studios to enter, not only for the recognition that even being shortlisted will bring to them and their work, but also for the message that this category of the Dezeen Awards sends to the industry – we all need to all be solving environmental problems, but also encouraging others to do the same," she said.

"It is no longer acceptable for design and architecture studios to be working in a way that doesn't balance people and the planet with profit, that doesn't put environmental considerations at the heart of everything they do – the more studios enter these awards, the more that message is communicated to the whole industry."

"Moving towards a circular economy"

"The definition of a circular economy has three tenets that cover designing out waste and pollution, keeping materials and objects in use, and regenerating natural systems" she said. 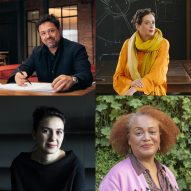 The author and consultant has recently launched Making Design Circular, a programme and membership community that empowers designer-makers to join the circular economy.

"Design is all about solving problems and as an industry, we need to turn our attention squarely to the problem that will come to define our era," she said.

Entries for Dezeen Awards 2022 are open until 8 June. Start your submission now for the chance to have your work seen by our star-studded jury.

For more details, visit our how to enter page. You can also subscribe to our newsletter to receive regular updates on Dezeen Awards 2022.