Hugh Broughton Architects has conserved and upgraded the 800-year-old Clifford's Tower in York, England, adding a timber deck to partially cover the ruin and provide a viewpoint overlooking the city.

Commissioned by English Heritage, the project was carried out to protect and radically transform the interior of the 13th-century landmark that once formed part of York Castle and was gutted by fire in 1684.

"The existing fabric has been carefully conserved and enhanced interpretation introduces visitors to the many stories associated with the tower and the wider castle precincts," explained the studio's founder Hugh Broughton.

Clifford's Tower crowns an artificial mound raised by William the Conqueror in 1068. The site was originally topped by a timber structure that formed the chief strongpoint of York Castle for centuries.

The wooden tower burned down in 1190 during a massacre of the city's Jewish community, who had taken refuge inside. This event is remembered by the planting of daffodils on the mound.

During the 13th century, the stone tower was constructed in its place on the orders of King Henry III. Its design was influenced by French castles but adapted with English architectural details.

The structure was predominantly used as a garrison and prison but gradually fell into disrepair following the fire. A programme of works in 1935 repaired the tower and improved public access, with a straight stairway added to the side of the mound.

Hugh Broughton Architects' primary intervention is the addition of a freestanding timber structure slotted inside the empty stone shell. Four wooden columns support a roof deck that includes an amphitheatre for group activities.

The timber framework sits on a raft foundation that spreads the structure's load without impacting the archaeological remains beneath the tower. 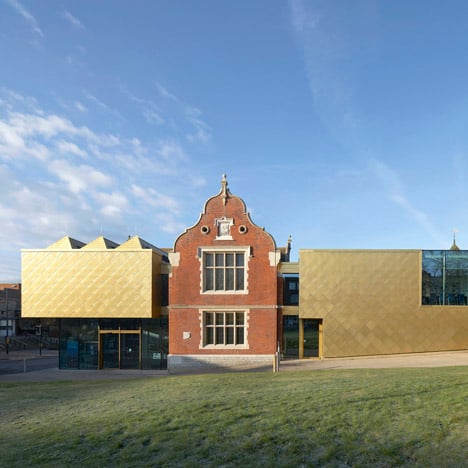 The wooden roof deck steps down towards the front of the tower, hiding it below the original parapet while forming amphitheatre seating. A void at the deck's centre allows daylight and fresh air to reach the interior.

Inside, lightweight metal walkways are suspended from the wooden structure at the first-floor level to allow visitors to enter previously inaccessible spaces such as a chapel and a toilet built for King Henry III.

The walkways feature timber handrails with mesh balustrades to maximise transparency and are accessed by a metal stair that ascends from the centre of the tower's floor.

A pair of turrets have been restored and updated with spiral staircases that connect the walkway and the roof deck. Existing winding stairs near the entrance also provide access to the roof.

As part of the restoration, the tower's fire-damaged stonework, walls, stairs, arrowslits and fireplaces have also been repaired. The chapel's stonework was cleaned while its roof was repaired and reclad with clay tiles.

Visitors now access the tower through an entrance in an adjoining forebuilding where a ticket kiosk has been added.

The main space contains several informative lecterns and benches for seating, along with speakers that create an immersive soundscape.

An enlarged public area at the base of the mound incorporates new signage and a space for an auto-rickshaw used by English Heritage to sell tickets and guidebooks. The existing stair leading up to the tower has been improved with new handrails and three resting places.

Hugh Broughton Architects was founded in 1996. The studio has previously added a new wing clad in golden shingles to a Tudor-style museum and created an oxidised-steel extension for a museum at the former home of the artist Henry Moore.

The photography is by Dirk Lindner unless stated otherwise.