Foster + Partners has released plans for the new global headquarters for JPMorgan Chase in Manhattan, which the architecture firm claims will be New York's largest all-electric tower.

The skyscraper for the finance company at 270 Park Avenue will be "New York City's largest all-electric tower with net-zero operational emissions", according to Foster + Partners.

"[It] will be 100 per cent powered by renewable energy sourced from a New York State hydroelectric plant," the studio continued.

The building will take the place of SOM's Union Carbide Building, the demolition of which between 2019 and 2022 marked it as the tallest voluntarily demolished building in the world.

With 60 storeys, the new supertall skyscraper will reach 1,388 feet (423 metres) and will be the first project in New York City's Midtown East rezoning plan.

Designs for the structure of the tower show a series of rectilinear forms pressed together – like a stepped deck of cards – with the tallest coming to an apex.

The tops of each successive step appear to be landscaped with trees and greenery in visualisations.

Glass facades will be bound by metal detailing at the edges of the forms, and the broadside of the rectilinear volumes will be crisscrossed by diamond-shaped trusses.

These trusses will continue on the ground level, which tapers. The trusses will fan up from the sides of the base, making the whole structure appear to stand on stilts, beside a large public plaza on Madison Avenue.

"By lifting the building about 80 feet (24 metres) off the ground, it extends the viewpoint from the Park Avenue entrance through to Madison Avenue," said Foster + Partners.

The working spaces in the tower will come to a total 2.5 million square feet (232,257 square metres).

These will be "flexible and collaborative spaces that can easily adapt to the future of work" said the studio, also noting that the building will have 25 per cent more volume of space per person than Union Carbide. The architects and developers predict that the building will be able to hold about 14,000 employees.

Remarkably, the architects said that the project "reused or upcycled 97 per cent of the building materials from the demolition." 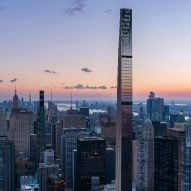 Technological developments feature heavily in the details that have been released, including those that cater to changing workspace needs during the pandemic.

Foster + Partner plans to include 50,000 connected devices, making it "the most connected, data-driven high-rise building in New York City".

The studio also noted that the new design will bring in 30 per cent more daylight than the "typical developer-led, speculative office building" and will use circadian lighting to "minimise the effects of electric light and support a healthier indoor environment".

Other Foster + Partners skyscrapers in New York City include a super-skinny skyscraper at 10o E 53rd, recently renamed Selene, as well as a skyscraper at 425 Park Avenue.