White siding and a curvy aluminium screen make up the exterior of a residential building in Los Angeles designed by American firm Brooks + Scarpa.

Located on the edge of the city's Valley Village neighbourhood, the Magnolia Hill Apartments building occupies a corner site that formerly held a gas station.

"Magnolia Apartments is a new model of mixed-use housing that includes both workforce and market-rate housing," the team said, noting that many of the tenants use public transit and don't own a car.

"The project affords access to important community amenities and to an extremely popular and pedestrian-friendly neighbourhood."

Rectangular in plan, the three-storey building has a variety of cuts, openings and curves that break up its blocky form.

The first level is slightly cantilevered over the ground level, while the top portion is recessed. Balconies, open-air walkways and stretches of glass are found on the exterior.

The building's main corner is rounded and marked with a tall window. Merging with the corner is a perforated-aluminium screen, which swoops in and out along the eastern elevation.

The brise-soleil helps mitigate solar gain and reduce noise, while still enabling daylight and fresh air to pass into the building. It "sparkles in the sun and glows at night", the architects added.

In addition to the screen, white-coloured metal was used to clad the building's exterior walls.

"The material reappears as a strategic arrangement of screens on the east, west and north-facing walls, lending a subtle rhythm to the exterior circulation while filtering direct sunlight through the facade," the firm said.

The upper three levels contain 19 studio apartments, including loft-style units with a mezzanine. The ground level has a lobby, a parking garage and a bike room, along with 1,600 square feet (149 square metres) of retail space.

On the second level, the team incorporated a communal courtyard, where tenants can enjoy a secure environment that has direct access to the street below. 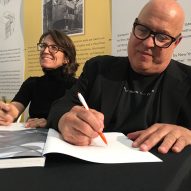 "Magnolia builds on the local courtyard housing typology, but unlike those earlier traditional buildings, it is more idiosyncratic – creating increased security, privacy and openness while connecting to the greater community outside the building walls," the team said.

Within the units, the team used materials that would minimise off-gassing, including formaldehyde-free cabinetry made of medium-density fibreboard.

Other eco-friendly elements include LED lighting, a system for collecting and reusing stormwater, and a rooftop spot for future photovoltaic panels.

"These details, coupled with the qualities and character found throughout, distinguish this project from similar projects and benefit not only each individual resident but also the community at large," the firm said.

Other projects by Brooks + Scarpa include a North Hollywood apartment building that has a central courtyard and a large gap along its main facade, and a low-cost housing development for displaced veterans in LA's MacArthur Park neighbourhood.

The photography is by Tara Wujcik and Lawrence Scarpa.