Workspace brand Patch has converted the former Gray & Sons Brewery in Chelmsford, Essex, into a co-working space that aims to offer its members a positive work-life balance.

Patch's creative director, architect Paloma Strelitz, has overseen a renovation that turns the Victorian building into both a workspace and a cultural venue.

As the brand's first location, it is the prototype for its "work-near-home" concept, which offers people workspaces close to where they live, so they don't have to work from home or commute.

"I think there has been a big shift in what people want from work and life through Covid, with people reevaluating their career paths and deciding that now is the time to set up on their own," said Strelitz in an interview with Dezeen.

"We're saying to people, we are an exciting alternative to your kitchen table." 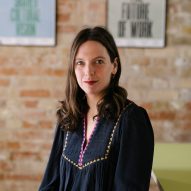 Patch Chelmsford is designed to celebrate the history of the building, but to also feel welcoming.

Structural elements – including timber ceiling beams, brick walls and steel columns – are left exposed, but paired with vibrant colours and graphics, plus plenty of plants.

Strelitz enlisted designer Ali Hanson to develop a graphic identity that references the original Gray & Sons. This extends into the interior in the form of hand-painted signage, posters and vinyl graphics.

"Our approach to the building is to celebrate its history as a thriving local brewery and its new purpose – as a centre for local enterprise and community activity," she said.

The ground floor of Patch Chelmsford incorporates a suite of spaces that are accessible to the public, to support local businesses and culture.

The reception is a generous, lounge-type space designed to function as a public library. A curated collection of books is displayed on a pair green-topped plywood trestle tables, encouraging visitors to stop and take a look.

Next door is Patch Academy, a flexible events studio that can be used for a range of different activities by both Patch members and the local community.

A glazed facade is intended to encourage public interest in this space. Other features include durable blue flooring, a translucent curtain, a projection screen and lightweight furniture, to offer flexibility of use.

Also on the ground floor is Patch Market, a cafe and bar, that doubles as a venue for informal talks and events.

The space features banquet seating and a bar lined with chevron-patterned tiles.

These elements draw on Strelitz's previous experience of creating successful cultural venues; prior to joining Patch, she was a co-founder of Turner Prize-winning architecture collective Assemble.

"We think of Patch as a local cultural venue – from a teenager attending a coding workshop at Patch Academy to a public talk in Patch Market and to the person launching a business from Open Studio," said Strelitz.

Workspaces are located on the first and second floors, including communal lounges, hot-desking studios, dedicated desks and private offices.

Members also have access to a library where plywood desks are framed by plants and a member's lounge overlooking the yard, which provides a venue for lunches, meetings and networking.

“At Patch, we're home to a community of freelancers, businesses, and local organisations," explained Patch's founder and CEO, Freddie Fforde.

"We've created a place to support their different working rhythms, from quiet corners for focused work, to lively areas for collective workshops and events."

"We believe that work near home supports a better work-life balance, combatting both the isolation of working from home and the time and expenses of commuting," he continued.

"That's why we are creating high-quality work environments on local high streets, enabling people to have a productive and enjoyable workday, and to spend more time with friends, family, and in their community.

Patch Chelmsford launched with a programme of events that included the Festival of Ideas, a series of locally focused events with titles including Crafting a Sense of Place and Reimagining The Future of Work.

The photography is by Philipp Ebeling and Georgia Randup.