Architect Caro Lundin has opened the second branch of her affordable co-working chain ARC Club in London, which features a pared-back interior accented by colourful fixtures and furnishings.

Set in the southeastern neighbourhood of Camberwell, the shared workspace was put together in just seven weeks and takes over a 223-square-metre commercial unit that previously sat empty for three years.

The latest ARC Club outpost follows in the footsteps of the company's first location in Homerton, which opened a few months after the start of the pandemic.

Much like its forebearer, it aims to provide a low-cost co-working space for hybrid workers, who don't want to return to the office full-time but struggle to do their jobs effectively while working from home.

Lundin, who founded ARC Club alongside businesswoman Hannah Philp, says this understated approach is key in a time when co-working is "a necessity and not a lifestyle accessory".

"Being Swedish, I'm very much in favour of the saying that good design and art should be available to everyone," she explained. "Just because ARC Club is an affordable alternative doesn't mean members should have to compromise on quality or design."

The Camberwell co-working space is loosely divided into three different zones. Near the entrance, there's a small cafe where members can drop in throughout the day to grab food and drinks.

To the left is an area for collaborative work, complete with group desks and high counters that can accommodate two to three people and their laptops.

The right side of the room is designated for more quiet, focused work. It features a plum-red seating banquette and a series of smaller tables for solo workers. 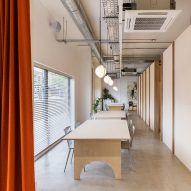 The different areas are separated by two boxy birch plywood volumes arranged into a rough T shape, with one containing meeting rooms and storage cupboards while the other houses six private booths where members can make video calls.

The volume that sits towards the front of the plan delineates the cafe from the rest of the interior and is slightly shorter than the other in order to allow natural light to seep into the work areas at the rear.

Otherwise, fixed partition walls and doors were omitted so that when office hours are over, ARC Club Camberwell is flexible enough to be used for other events.

Most surfaces in the shared office are left raw or freshened up with a coat of white paint. But pops of colour are provided by the baby-pink booth doors and the orange-framed armchairs that are positioned around some of the tables.

Several co-working spaces have opened in London in recent months to cater to locals who are opting to carry out their jobs remotely.

Other examples include Paddington Works with its wellness-focused interiors and Bureau in Greenwich, which is designed to act as a "home for creatives".

The photography is by Andrew Meredith.