Portuguese practice Atelier Data has renovated and extended a farmhouse in the Alentejo region with a plain, white form and traditional materials that mimic the appearance of the existing building.

To design the new home, called Casa Mãe, Lisbon-based Atelier Data returned to a site it first worked on in 2012, when it converted a run of horse stables into a summer retreat.

Continuing the themes of this previous project, the practice used an approach of "rehabilitation and recovery" to update the existing timber-framed dwelling, stripping back new additions and using simple, white-painted finishes inside and out.

At the core of the home is a kitchen and dining space, which opens out onto a new paved terrace shaded by a white-painted wooden pergola.

"The social and agglutinating character of this space is reinforced by its interior volume and by the extension of the living and dining area to the exterior," said the studio.

"The incorporation of a pergola to the southwest promotes the relationship between the building and the landscape."

At the southern end of the home, two en-suite bedrooms sit on either side of a central wall, extending into the new volume that matches the scale and form of the existing structure.

This contains enlarged storage areas and bathrooms, opening out through sliding glass doors onto external, private patios for each bedroom that include built-in showers.

Sheltering these patios from the outside are perforated wall sections at the extension's gable end, informed by traditional cobogó bricks often used in South America to allow light and air into buildings.

"The design of the porous element used on the southeast facade was explored in order to allow a dynamic between light and shade that brings life to the courtyards and adjoining spaces inside," said the studio. 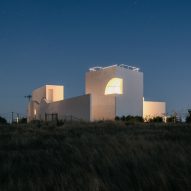 Traditional finishes and materials have been used to connect the new alterations with the old building, such as clay tiles for the roof and dining room floor, lime render on the exterior and patterned hydraulic tiles on the external patios.

Throughout, the timber roof structure of the original building has been left exposed and painted white to create high, bright ceilings.

Many of Atelier Data's previous projects have involved dealing with existing structures, often through the use of simple interventions and minimal finishes.

In the Algarve, the practice recently converted a former granary mill into a holiday home, using white forms with geometric cut-outs.

The photography is by Richard John Seymour.