Plans for British architect Norman Foster to lead the reconstruction of Kharkiv are premature and neglect other cities across Ukraine that have also been destroyed by Russian troops, according to Slava Balbek of local architecture studio Balbek Bureau.

"The bombing hasn't finished yet," he told Dezeen. "How you can set the scope of work before you've analysed the level of destruction?"

"It's too early to involve somebody," added Balbek, who founded Kyiv-based firm Balbek Bureau. "For now, it's 100 per cent ineffective."

Following a meeting with Kharkiv mayor Ihor Terekhov, Foster is set to recruit a team of "world-leading experts" that will immediately start drawing up a master plan for the city's reconstruction.

But in order to help Ukraine rebuild in a way that is both fair and efficient, Balbek argues architects first need a better idea of what has to be done across the whole country, so that resources can be allocated according to need.

"It's really good that people want to be involved and I'm happy that Norman Foster had these discussions," he said.

"But you can't invest hundreds of millions in one city when you have so many villages around it that need to be repaired," Balbek added. "Somebody needs to see the whole scope of the problem and then there should be a balance of influence between different architects."

Since the start of Russia's invasion on 24 February, around 25 per cent of buildings in Kharkiv have been destroyed, with shelling hitting crucial infrastructure like housing, hospitals and schools as well as more than 30 heritage sites.

And damages are only set to increase as bombing continues and Russian troops attempt to gain control of Ukraine's second-largest city, which lies only 42 kilometres from the Russian border.

Kharkiv has received particular attention from heritage groups such as Docomomo and UNESCO due to its high density of architecturally significant buildings such as the constructivist Derzhprom complex and the City Hall.

But a number of other towns and cities have witnessed similar or worse levels of decimation, Balbek says, with 90 per cent of buildings in the port city of Mariupol estimated to be either damaged or destroyed.

"You can't rebuild one city with no information about what is going on all over Ukraine," he argued. "For the price of reconstructing Kharkiv, you could help five different villages with many more people, which is extremely needed right now."

Ukrainian president Volodymyr Zelensky underlined the importance of using the country's reconstruction efforts to make housing fairer and greener during a daily address to the nation earlier this month.

"The task is not only to physically rebuild the houses, apartments, bridges and roads, businesses and social infrastructure that were destroyed by Russian troops," he said. "Not just to give people back everything they lost and give them a new foundation in life." 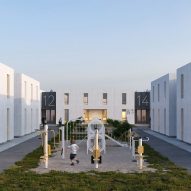 "Now is a historic moment, in which we can solve many old problems with the whole environment of our lives once and for all, in which we can make quality urban planning where it did not exist," he continued. "We can take into account real traffic flows, guarantee energy savings, environmentally friendly materials, inclusiveness."

The first stage of Zelensky's national reconstruction strategy will involve building temporary shelters to house locals while their homes are rebuilt.

One of these is set to be located near Kyiv and designed by Balbek Bureau based on a blueprint for a modular refugee village, which the studio developed in response to the invasion.