US startup Cosmic has created a solar-powered accessory dwelling unit that is built using a special construction process and generates far more electricity than it needs.

Based in San Francisco, Cosmic was founded by Sasha Jokic, an entrepreneur, inventor and trained architect who has worked in the design and construction field for over 14 years. Previous ventures include Formdwell, a startup company that is creating new construction tools powered by intelligent robots.

For his latest project, Jokic and his team at Cosmic have developed an efficient construction system and an all-electric, zero-emissions home that is meant to be "a new, bold step in solving the housing and climate crisis".

The Cosmic buildings diverge from the norm in a few ways. According to the company, they are constructed using a streamlined process that is faster, more economical and less wasteful than typical methods.

Moreover, the buildings are designed to generate their own power while using minimal energy and no fossil fuels. Plus, they can generate extra power that is stored and redistributed.

The team has completed its first model unit, an ADU called Cosmic Studio, which has one level and totals 350 square feet (33 square metres). The compact dwelling holds a bathroom and an open area for sleeping, living, dining and cooking.

While this initial unit was conceived as housing, the company emphasized that the buildings could be used for other functions, such as playrooms and offices. The need for flexible buildings has become amplified due to the coronavirus pandemic.

"The ‘American Dream' 2.0 is a home where we live, sleep, work, school and play – a ﬂexible space that keeps us and the planet healthy," the company said.

Cosmic creates its units via a "hybrid prefab approach", with parts of the building made in a factory and other components built on-site.

The frame, or chassis, is a modular system made of standardized components.

The modules come in different sizes – ranging from 18 to 45 square feet (1.7 to 4.1 square metres) – and modules are combined to form buildings of varying scales. Fourteen standard modules were used to create the chassis for the Cosmic Studio unit.

"The chassis is both exceptionally strong for greater structural performance and highly adaptable to accommodate a wide range of home layouts," said Jokic.

The chassis is made of metal and wood. The joists, joints and decking are fabricated using thin sheet metal and tubes, while other structural elements are made of sustainably sourced wood. The roof is standing-seam metal.

The module's components are built in a factory, put into flat-pack containers and then transported to the site via a flatbed truck. A module's maximum weight is 600 pounds (272 kilograms), making it relatively easy to offload and assemble with a small telehandler. No cranes are required.

"Unlike other prefab ADUs companies that deliver pre-assembled big and bulky modules, making them expensive and difficult to ship, Cosmic is transporting chassis modules as a flat-pack on a small-size flatbed," said Jokic.

Also delivered to the site are roof underlayment, facade and interior walls, and doors and triple-glazed windows that are manually attached using Cosmic's "click-in joinery system". These elements are built on-site.

"We drive significant cost and performance improvements on the chassis, leaving less expensive and simpler components, such as walls and finishings, to be done by professional builders on site, in the relatively cost-effective way they already do," the team said.

The home sits atop a proprietary foundation that consists of underground anchors, above-ground legs and self-levelling joints. Screw threads or concrete footing can be used for the underground portion, depending on the soil type.

Wall panels are made of cross-laminated timber and different types of plywood, while flooring is made of engineered hardwood. Cladding options include stained cedar – in black, grey or natural – or composite panels in a copper hue.

Units with kitchens are fitted with quartz countertops and premium cabinetry. Bathrooms have tiled shower walls and high-end fixtures. Other features include high-efficiency LEDs, a smart thermostat and an accompanying app to monitor electricity usage.

The home is designed to minimize energy consumption through features such as continuous insulation and air-tight windows and doors.

While designed to tie into public water and sewage systems, the Cosmic ADU is able to generate all of its own electricity.

The units come with pre-assembled systems for mechanical, engineering and plumbing, which includes a sizable battery pack for lithium-ion and thermal energy storage.

The units are also equipped with a rooftop solar array that can generate from seven to 20,000 kWh per year in the California region – much more than the ADU is expected to need.

The team envisions the extra energy being stored and then distributed to the main home on the ADU's property, or to an electric vehicle.

"The ADU is able to generate and store both electricity and thermal energy when it's most efficient and cheapest, and then distribute it into the household when it's needed," said Jokic.

Owners can purchase the solar array and battery pack or borrow them from Cosmic. In the latter scenario, Cosmic owns the excess energy generated by the ADU. 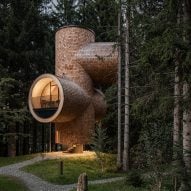 Cosmic is presently housed at the Autodesk Technology Center in San Francisco, where it will produce the chassis modules for its first batch of homes. It also works with local material suppliers and manufacturers.

It currently takes four to six months to build and deliver a Cosmic ADU. The company is not releasing pricing at this time.

Cosmic's ultimate aim is to transform the building industry.

"Our homes are changing," the company said. "Climate warming and the global pandemic have reshaped our living environment, and we are not going back."

Other revolutionary building ideas include customized backyard dwellings by the design-build firm Cover that are created using computer algorithms, and "nomadic" hotel units by the startup Moliviing that are prefabricated and intended to be moved around.

The photography is by Milos Martinovic.