Titled Breaking Waves, the seven-minute piece was designed to mark the fifth anniversary of the building's opening and was due to be performed every night from Thursday to Sunday last week.

However, the performances on Friday, Saturday and Sunday were cancelled after the rehearsal and premiere were disturbed by what Drift called "aggressive disruption" by anonymous drone operators that knocked some of the performance drones out of the sky.

"There have been several collisions and as a result, numerous drones have crashed," Studio Drift wrote on its Instagram account.

"According to information from the aviation security authorities, there have never been disruptions to air traffic of this intensity and aggressiveness in Germany. This requires a reassessment of the security situation."

"Since it cannot be ruled out that such crimes will be committed again by anonymous drone pilots in the following days, it is irresponsible to continue Breaking Waves in order to protect viewers and employees," the studio continued.

"Those responsible at the Elbphilharmonie and the artists from Drift are sad and frustrated that they have to cancel the repetitions of the light installation, which thrilled thousands of viewers at the premiere." 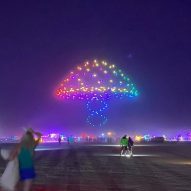 The kinetic installation consisted of 300 illuminated drones programmed to move together in a wave-like pattern around the facade of the Elbphilharmonie.

It was commissioned to coincide with the Hamburg International Music Festival, which takes place within the Elbphilharmonie.

The Amsterdam-based artist collective, formerly known as Studio Drift and made up of Lonneke Gordijn and Ralph Nauta, intended the piece to be a dialogue with the distinctive form of the building, which was designed by Swiss architects Herzog & de Meuron and completed in 2017.

"The work is a conversation between the building and the moving light drones," Gordijn said. "It is an attempt to build a moment of connection between humans, machine and the environment."

"What we find very interesting in our studio is to bring people and places together in the same frequency," she continued. "So we created a moment where a connection can be established and everyone can have a shared experience."

The piece was choreographed to Thomas Adès's Concerto for Piano and Orchestra, which was recorded at the Elbphilharmonie in January of this year.

Drift has previously staged performances using illuminated drones including its Franchise Freedom installation, but this is the collective's first drone installation that interacts with a building.

"Breaking Waves is also an expression that means doing something for the first time that's quite bold, and I think that's something the Elbphilharmonie has in common with our approach at Drift," Gordijn said. "We love to do projects that have never been done before and are quite challenging."

The performance was accompanied by an exhibition of work by Drift at the Museum for Applied Arts in Hamburg which opened in January.

Originally scheduled for January, the Breaking Waves performance was postponed due to coronavirus restrictions in Germany.

The event is part of a wider programme of cultural events, celebrating the building.

"Thanks to the Elbphilharmonie with its inspiring architecture and its varied, high-quality programme, Hamburg's image as a city of art and culture has become much more pronounced both nationally and internationally," said Hamburg's minister for culture and media Carsten Brosda.

Located on the River Elbe, the Elbphilharmonie houses two concert halls, an educational centre, a hotel and private accommodations as well as a viewing platform.

The structure is built on top of a traditional red-bricked storage warehouse from the 1960s. 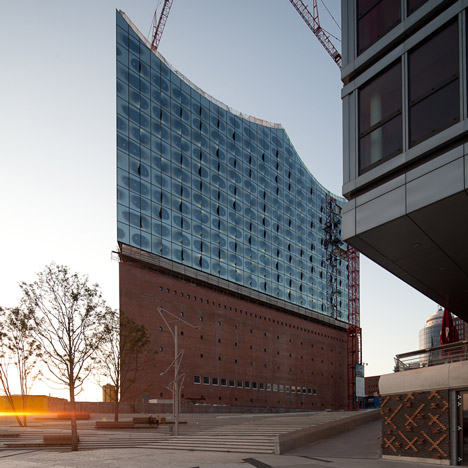 Drift's work frequently makes use of technology to create moving sculptures and installations.

The duo, which was named designer of the year at the 2019 Dezeen Awards, has previously designed a kinetic sculpture made of 10 miles of ultra-fine nylon for the Dutch National Touring Opera's production of L'Orfeo.

Last year the artists designed an installation together with architect Sou Fujimoto made up of flower-like lamps that rise and fall.