Interior designer Magdalena Keck has filled a glass-and-steel home in New York with a restrained but eclectic mix of furnishings that are meant to complement the existing architecture.

The Hudson Valley Glass House is located in Westchester County, about an hour's drive from New York City.

The modernist home was designed by architect Robert Fitzpatrick and built-in 1967. Rising two levels, it contains a public zone on the upper level and three bedrooms and a family room down below.

The clients – a couple with a young daughter – recently purchased the home and tapped Magdalena Keck, who runs an eponymous Manhattan studio, to oversee the interior design. For their full-time residence, the owners desired furnishings that were modern, function-driven and meaningful.

"The clients, a family of three, are well versed in design and art, and it was important to them to have a personal connection to each of the items selected for their home," the studio said.

Drawing upon her penchant for "warm minimalism", Keck chose a range of pieces that complemented the architecture and the existing finishes, including wood flooring and vanilla-hued window drapes.

"Magda likes to think of the home as a glass envelope, serving as a vessel for the furnishings, lighting, art and objects that she has worked carefully with the client to fill the space with," the studio said.

In the living room, she placed a grey bouclé sofa by French designer Christophe Delcourt and an octagonal, brutalist-style coffee table in resin.

In the adjacent dining area, beech-and-fabric chairs by Sergio Rodrigues surround an Extenso table from Desalto.

Rather than hang a light fixture over the table, the designer added a Mito floor lamp by Tom Fereday and a 1960s Tripod Cocoon floor lamp to provide illumination and visual interest. A large, hyper-realistic painting of choppy water by Ran Ortner rounds out the dining space. 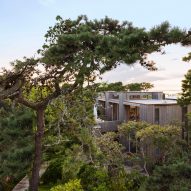 Downstairs in the family room, the atmosphere is casual and cosy. The space is adorned with a sofa by Piero Lissoni for Living Divani, Scandinavian nesting tables in rosewood, and a side chair by Børge Mogensen. Underfoot is a Soumak rug from ALT for Living.

Audio and visual equipment is housed in a cabinet made of waxed aluminium by Jonathan Nesci.

In the main suite, there is a king bed from Camerich, Danish rosewood nightstands and two Bauhaus table lamps by Wilhelm Wagenfeld.

The daughter's room is fitted with custom pieces designed by Keck's studio, including a  bed platform in oak and a desk with modular storage pullouts. There is also an Adorno wall lamp made of wood and brushed brass, and an astronaut painting by American artist Michael Kagan.

The home's guest bedroom features a bed by Lawson Fenning, a ceramic-painted nighstand by Reinaldo Sanguino, and a rare Valet chair by Hans Wegner dating back to the 1950s.

Keck's furnishing work also extends to the backyard, where there is a patio and swimming pool. Furnishings include a sofa and coffee table from Unopiù. A rounded, white dining table by Eero Saarinen is paired with white chairs by Harry Bertoia.

Other projects by Magdalena Keck include a stark-white residence in a Four Seasons tower in Lower Manhattan, and the outfitting of a Catskill Mountains home, where she fused Danish and Japanese design.

The photography is by Jeff Cate.