Dutch design office Studio MOM has developed a bicycle helmet from biomaterials that, unlike polystyrene helmets, can be produced without fossils fuels and composted after use.

A specially developed form of mycelium – the fleshy root-like structure of a fungus – forms the main shell of MyHelmet, while the outer skin and strap are produced from a hemp textile.

The result is a helmet that, according to Studio MOM, can be manufactured more sustainably and produces less waste after use.

"MyHelmet fits in with principles of the circular economy," said the studio. "There are minimal CO2 emissions, it does not require any fossil raw materials and the end result is 100 per cent biodegradable."

Experts recommend replacing a helmet every three to five years, as the strength is likely to be reduced by the wear-and-tear of regular use.

However, most bicycle helmets are made from expanded polystyrene, or EPS, a form of plastic that is difficult to dispose of. It is non-biodegradable and harder to recycle after it has been glued to the other components of a helmet.

The MyHelmet design replaces the EPS with a mycelium that is cultivated on a diet of hemp flakes.

By briefly heating up this mycelium during the growing process, its structural makeup becomes similar to that of EPS; it becomes rigid, lightweight and has low thermal conductivity.

The natural layer structure of the mycelium also creates space for airflow, helping to keep the wearer's head cool. 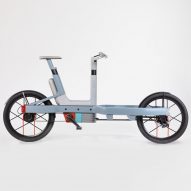 The process was developed by junior designer Alessandra Sisti as her graduation project from the Design and Engineering masters programme at Politecnico di Milano.

Sisti was able to further develop the design after joining Studio MOM, testing a wide range of material compositions to find the most effective solution.

The various elements of the helmet are combined during the process. This allows the mycelium to bond with the hemp textile that forms the strap and outer skin, providing extra support and removing the need for glue.

Studio MOM has carried out a series of initial tests to ensure the product's safety for use.

An FEM analysis of the product prototype allowed the designers to assess the shape, strength, rigidity and fatigue of the material. A simulation of the NTA standards test – the test which decides if a helmet complies with the requirements in the Dutch technical agreement – was also carried out, with "promising" results.

The Arnhem-based office has designed a series of bicycles, including an electric cargo bike powered by a hydrogen battery, the LAVO Bike.

Studio MOM founder Mars Holwerda is now hoping to find partners to help the studio develop the design from a prototype to a commercial product.

"By developing a new process, we have taken a considerable step towards using mycelium bio-manufacturing on an industrial scale," he said.

"The bicycle industry now has something at its disposal to stop the endless stream of harmful, systematic plastic and EPS waste. But we are not there yet. Who is in?"

Mycelium is increasingly being utilised across the architecture, design and fashion industries.

Other uses include as leather in a Stella McCartney fashion collection, as the walls of a Dutch Design Week pavilion and as the material for a Sebastian Cox lighting collection.