3D-printed "broken" columns join walls and floors created with an adobe effect at the Egeo restaurant in Valencia by interiors studio Masquespacio that aims to put a modern spin on traditional Greek architecture.

Masquespacio created the interiors for the Egeo Greek restaurant, which is spread across one floor and characterised by a blue and off-white colour palette that is reminiscent of many Greek houses.

The Mortex used for these walls and floors intends to give the space an adobe effect.

Fractured into two pieces, the restaurant's columns were created using 3D printing and are fitted with tubular lighting that connects each piece together.

"We wanted to recreate the concept of a broken column from the past, but uplift it with a contemporary look," Masquespacio co-founder Christophe Penasse told Dezeen.

Wooden stools resembling chunky chess pieces are scattered around built-in metal and wooden tables in the various seating areas arranged across the restaurant.

Sconce lights were attached to decorative organic shapes that protrude from the walls while olive trees sit in large, neutrally-hued pots. 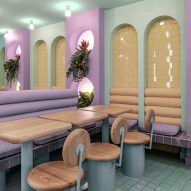 A central ordering bar was designed to recreate the atmosphere of a bustling market where you might order traditional souvlaki from a mobile vendor, according to Masquespacio.

"The restaurant was inspired by Greece's ancient architecture – from its typical white and blue houses to the ruins that are part of its important foundations in our world," explained Penasse.

The eatery is the first Egeo branch in Valencia, although the chain already has two similar locations in Madrid.

Based in Valencia, Masquespacio was founded in 2010 by Penasse and Ana Milena Hernández Palacio.

Similar projects in Spain by the studio include another cavernous restaurant that nods to adobe architecture and an eatery with curved forms that take cues from the nearby Pyrenees mountains.

The photography is by Sebastian Erras.