Luciano Basso has completed a concrete home in the forests of southern Brazil that is built around a mature Paraná pine tree.

The project was commissioned by a young couple, who wanted a home that would integrate harmoniously with the area's surrounding vegetation. The 240 square-metre home is located in Caxias do Sul, in the Brazilian state of Rio Grande do Sul.

The concrete home is perched on a steep site, which led local architect Luciano Basso to raise the project on pilotis to avoid disturbing the landscape. The tree appears to grow through the wooden slats of the terrace and is visible from the main living and dining area.

"Aiming at a minimum intervention in the topography, the main volume is supported by a pilotis that delicately touches the ground and adapts to the natural conformation of the terrain," said the architect.

"If it were possible for a huge crane to lift the house and land it somewhere else, the original terrain would remain practically intact, with no traces of the construction," he added.

The occupants park beneath the structure and enter the concrete home a lower level, which houses service areas.

A concrete staircase with open treads leads up and into the open concept kitchen, living and dining space. The walls of the staircase extend up to separate areas on the main level, creating the kitchen and a guest bathroom.

"On the upper level, from the geometric union of four rectangles, a structurally open plan was designed, where the separation between the functions of living, working, and sleeping is given by the spatial condition generated by the server nucleus," said Basso.

The home's sole bedroom is separated from the other living areas by a slatted wood wall, which lets some light filter through.

Full-height, sliding glass walls open onto the terrace in the sitting and dining room. The terrace offers a generous living area peering into the surrounding treetops. To allow views from more angles, the architect cut an opening into the side of the terrace, which also forms a bench. 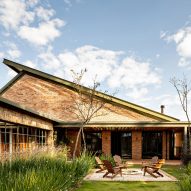 "Without curtains or visual barriers between inside and outside, the dweller has permanent contact with nature," said the architect. "At the same time he lives in the house, he also lives in the forest."

The wood used for the terrace was repurposed from the construction process. It was first used to build the concrete formwork of the home, which the architect says reduced wasted materials.

Inside, the board-formed concrete is visible on nearly every surface. "It is in the structure, in the closings, in the stair steps, and even in the fixed furniture," said Luciano Basso.

The architect integrated lighting into the concrete ceilings and designed upturned beams to support the roof. This structural system allows the beams to be external to the home, which creates a flat, continuous plane on the interiors.

Other homes built using almost exclusively concrete include a residence in the mountains of Córdoba by Nanzer + Vitas that was meant to resemble ancient ruins and a holiday retreat near Monterrey by Práctica Arquitectura.

The photography is by Manuel Sá unless otherwise stated.