Designer Anna Resei has created a conceptual design for a modular structure that can be used as a moveable shelter, which was shown as part of this year's Southern Sweden Design Days.

The Tele-nomadic Sheltering Unit, which was on show as part of the Southern Sweden Design Days design festival in Malmö, Sweden, was constructed to be both durable and moveable so that future nomads can set up shelter anywhere.

The structure can be dismantled and carried on the body, with the seat strapped to the back, the fabrics rolled-up and the bricks attached to the soles of the feet.

While the design is a concept, rather than a finished product, the moveable shelter prototype is light enough to be carried by one person.

"The steel structure is a bit heavy but it's possible," Resei said. "The whole structure is assembled and modular, so it can be rearranged and carried with you – it imagines a future where we live in the open and collectively, and only own as much as we can actually carry."

The Tele-nomadic Sheltering Unit's steel structure would always be set in the same configuration, creating a frame around which to build the shelter, but the project also includes five woven adjustable jacquard fabrics.

These were made together with specialist fabrics company EE Exclusives, and can be combined into different set-ups to protect nomadic users from the environment.

Resei imagines that as part of the design, the fabrics would eventually be woven from conductive yarn to harvest electricity for the "telenomads" using the shelter.

"It's meant to have conductive yarn woven into the textiles, so that your electricity could be refilled and then you would be fully self-sufficient," she explained. 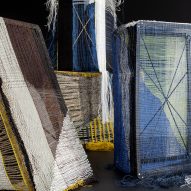 "And there's a little dot-matrix attached which would connect via the cloud, so you could find other telenomads nearby and get in touch with them, but you could also see what the weather is or [find out about] other situations," Resei added.

The project was made in collaboration with design studio Dutch Invertuals and futures consultancy The Future Laboratory.

A number of recent projects have featured conductive yarns, including design studio Layer's Move seating for Airbus that has a smart seat cover connected to a series of sensors that detect both the passenger's body and the conditions of their chair.

Dutch designer Hella Jongerius has argued that 3D weaving could be used to interlace building materials with photovoltaic solar yarns and create architecture that responds to the weather.