British manufacturer Dyson has announced that it is "supercharging its robotics ambitions" by developing home robots and building the UK's largest robotics research centre.

The research and technology company, which is best known for its vacuum cleaners, recently released a video and accompanying images of its robots carrying out domestic tasks such as cleaning, hoovering and tidying.

"This is a 'big bet' on future robotic technology that will drive research across the whole of Dyson, in areas including mechanical engineering, vision systems, machine learning and energy storage."

Dyson has revealed that it is working on home robots

In the video, which was first shown on Wednesday at the International Conference on Robotics and Automation in Philadelphia, robot arms with claw-like hands are shown laying the table, picking up plates and clasping a teddy bear.

Set to be on the market by 2030, the company envisions that the robots will save people time and improve lives.

Although, the company has remained tight-lipped about the exact technology behind the robotics – calling it "very top secret" – the video highlights that the devices use sensors, thermal imaging and cameras to navigate domestic environments and map out furniture in the home in 3D.

The company, which was founded by British inventor James Dyson in 1993, released its first robot floor-based vacuum over 20 years ago.

It has recently been attempting to expand its range of products and dabbling in new markets such as wearable technology.

In March, it launched a set of noise-cancelling headphones with an air-purifying visor that sparked a wave of confusion in the British press with some calling it "bizarre". 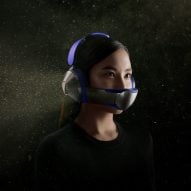 Alongside the visuals, Dyson announced plans to create a designated robotics laboratory at its facility at Hullavington Airfield, Wiltshire, where engineers will work on robotic developments.

As part of its new robotics drive, it will recruit 250 newly employed robotics engineers.

"The master plan is to create the UK's largest, most advanced, robotics centre at Hullavington Airfield and to bring the technology into our homes by the end of the decade."

Across its locations in London, Singapore and Wiltshire, Dyson said it hopes to hire a further 700 employees in the fields of computer vision, machine learning, sensors and mechatronics over the next five years.

The photography is courtesy of Dyson.