British technology company Dyson has unveiled Dyson Zone, a set of headphones with a removable visor designed to be used in urban environments to filter air pollution and reduce unwanted noise.

The first wearable product created by Dyson, the headphones incorporate active noise cancellation to block out urban noise pollution, while a removable plastic visor wraps around the front of the face to filter out allergens, gases and dust.

The unveiling was met by confusion in the British press with UK newspaper the Telegraph describing the Dyson Zone as a "bizarre air-purifying mask", the BBC calling it an "air vacuum for mouth" and GQ magazine describing it as the "craziest new gadget of 2022".

A compressor in each earcup of the headphone sucks in fresh air by spinning. The air then passes through double-layered filters made with a potassium-enriched carbon layer, which traps city gas pollutants.

Clean air exits through the other side of the mesh filter and is projected in a stream along the inner sides of the visor down to the wearer's mouth and nose, creating what Dyson calls a "bubble" of clean air from which to breathe.

"Precision-engineered compressors within the earcups draw air through the dual-layer filters, intelligently designed to fit within the considerable space constraints of a headphone," the brand explained.

"The negatively charged electrostatic filter media captures ultrafine particles such as allergens and particles from sources such as brake dust, industry combustion and construction whilst a potassium-enriched carbon layer captures city gas pollutants
like nitrogen dioxide and sulfur dioxide."

To ensure the air is kept close to the wearer and doesn't escape or become diluted by external air before reaching the nose or mouth, the company moulded the visor into a shape that optimises airflow.

"The geometries of the visor and the visor returns, alongside the central mesh that diffuses the two jets of airflow, ensure that the purified air exiting the filters is effectively delivered to the nose and mouth in crosswinds," explained the brand. 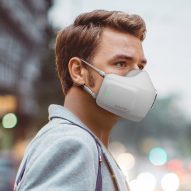 Meanwhile, the large headphones have three listening modes – isolation, conversation and transparency – which have all been developed with an advanced noise-cancellation system.

Dyson says that this "reduces unwanted environmental noise and motor tones to provide advanced noise cancellation at home, at work and on the go."

A slew of companies, including South Korean electronics brand LG, designed face coverings in response to the coronavirus pandemic.

The Dyson Zone has been six years in the making. It started out life as a snorkel-shaped wearable that was designed solely to combat air pollution. The brand has since adapted the device to incorporate space for traditional coronavirus FFP2 face masks to be worn underneath.

The engineers then measured the pollution level in its nose and throat in order to analyse the effectiveness of the headset. Dyson claims that its filtration technique captures 99 per cent of particle pollution as small as 0.1 microns, including dust, pollen and bacteria.

The product will be available online and in-store in autumn 2022.

Dyson was founded by inventor James Dyson in 1993. It has since become an industry leader in British technology and design, helping to make Dyson the richest man in the UK in 2020.

More recently, the company produced 15,000 of its CoVent ventilators for the NHS to meet the demand caused by the coronavirus pandemic.

Images are courtesy of Dyson.