Swedish designer Louise Hederström has worked with furniture brand Swedese to use leftover wood and plywood from a Cobe-designed building to create furniture for its public spaces.

Hederström's project Rephrased Matter, which was on show as part of the annual design festival Southern Sweden Design Days, saw the designer work together with Swedese to create a collection of furniture for the atrium, restaurant and meeting rooms in developer Skanska's Hyllie Terrass building.

The furniture will be made from materials such as plywood and wooden beams that were used during the construction of the building, which was designed by Danish studio Cobe, and would otherwise have been burned.

Hederström, who approached Skanska together with Linus Davidsson, sales representative at Swedese, said they will instead use the waste material from the building site for both "big and small projects."

The first item is set of stools and a table that will be used in the building's atrium. They were made from wooden latches and plywood used on the site to cover elevator shafts and as temporary staircase banisters.

"We don't really know yet, but that's also the part of the process – we see something, we save it and we and the latches was really something that was easy to see that this is possible to work with," Hederström told Dezeen.

The time-consuming process of designing furniture from scrap materials requires a lot more preparation than working with virgin wood does.

"You have to have time to collect the material, you have to store it and dry it," Hederström explained. "It's a longer process, and we're learning by doing."

For the stools Hederström combined waste wood with leftover materials from Swedese, as the padding and fabric material needed was not available from the building site itself. 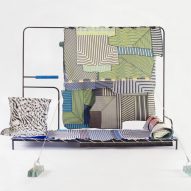 Instead, the stools have a filling made from leftover sheepskin from Swedese's production, covered by leather seats that are made from leather with minor imperfections that meant the company was unable to use them for other furniture.

A steel ring used in Swedese's furniture production and made from 80 per cent recycled metal holds the stool's wooden legs together.

The current collection also includes a table made from the same wood and plywood pieces, and Hederström also plans to use the wooden latches to create a long sofa that will sit in the central atrium.

For her, having to use already-cut wood and other materials in existing conditions was a welcome challenge, rather than a disadvantage.

"I like the challenge that you have a material to have to work with," she said.

"So with the stool, I wanted to change the dimensions of course, but I wanted you to still feel the connection to the material and understand its construction, how it holds together."

Hederström will also use wood from elm trees that have had to be felled because of Dutch Elm disease, while leftover materials from Swedish furniture and design companies will be used to create accessories for the interior of the building.

Hederström hopes that the initiative, which Skanska said it hopes to also expand to other buildings, will become more commonly used when constructing new buildings.

"I hoped that it would open their eyes, but also, I think that when they count and see 'we have 1,000 metres of wood that we just throw away' they can also say 'let's save it for next building'," Hederström said.

"They can rethink their way of planning. And I think it was an eye-opener, that they realise that this is something that we could use. Especially when the world is a bit upside down, we have to take better care of material resources." 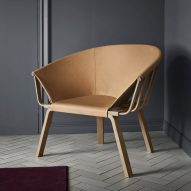 Hyllie Terrass, the building that the furniture will be used in, was designed by Cobe for Skanska and is part of a pilot program for NollC02 buildings, which Skanska says will have net-zero emissions over their entire life cycle. It will be ready for occupation in spring 2023.

Hederström has previously made a concrete bench and traffic barrier using waste, while Swedese recently worked with graduate Mika Lindblad on a furniture collection designed without upholstery.

The photography is by Daniel Engvall unless otherwise stated.