Italian lighting company Foscarini has acquired Ingo Maurer – the eponymous brand of the late German designer and "poet of light" – with the aim of bringing his designs to a larger international audience.

Venice-based Foscarini purchased a 90 per cent stake in the business while 10 per cent of shares remain with Maurer's daughter Sarah Utermöhlen.

The sale follows Maurer's death in October 2019, when critics bid farewell to "the most inventive and creative lighting designer of the century".

Foscarini will continue to run Ingo Mauer as a distinct brand and aims to bring the designs to a larger market.

"We will manage the brand Ingo Mauer in full respect of the company's DNA and its important heritage," Foscarini founder Carlo Urbinati told Dezeen.

"We have had the opportunity to guarantee ourselves the honour and burden of playing a part in ensuring that the story of Ingo Maurer continues to be talked about around the world and support its further development on global markets."

Currently, all of Ingo Maurer's products are designed and made in Munich, where the designer produced all of his work from 1970 onwards.

This includes seminal designs such as the oversized lightbulb-shaped Bulb lamp and the winged Lucellino table light, both of which are also part of the permanent collection at MoMA. 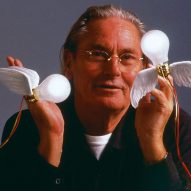 For Foscarini, acquiring a brand that straddles the line between art and design is an attempt at strengthening its position in the world of decorative lighting, Urbinati said.

At the same time, Ingo Maurer will gain access to the company's wider network of more than 2,500 retailers all over the world, with the aim of growing the brand in a range of markets including Italy, Asia and the US.

"After carefully evaluating all the options, my sister Claude Mauer and I have decided that inclusion within the Foscarini creativity hub is the best strategy to enable Ingo Maurer to continue to strengthen its path of growth on a national and international level at the same time as conserving its founding traditions and values," Utermöhlen said.

"We are convinced Foscarini is the right company to give further impetus and development to the artistic world of Ingo."