Gailhoustet is the fourth winner of the Royal Academy (RA)'s Architecture Prize, which "celebrates under-recognised contributions" to architecture.

The French architect is an advocate of social architecture who is best known for the 10-storey Le Liégat apartment complex in Ivry-sur-Seine and the terraced La Maladrerie apartment block in Aubervilliers.

She currently lives and works from a studio within Le Liégat.

"Her work has a strong social commitment that brings together generosity, beauty, ecology and inclusivity," she continued.

The jury recognised Gailhoustet's work for its ability to foster social connection in urban environments along with the architect's lifelong commitment to developing social housing in the Paris suburbs.

"Renée Gailhoustet's impressive body of work consistently reflects her interest in realising architecture as a social and cultural practice," the jury said.

"Her buildings demonstrate a belief in social connections and an aspiration for structures and urban environments that are cohesive but underpinned by diversity." 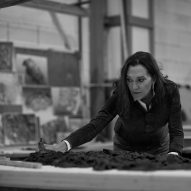 Since 2018, the Royal Academy Architecture Prize has been awarded to an individual whose work inspires and instructs the discussion, collection or production of architecture.

The four finalists for the Royal Academy Dorfman Award, which recognises emerging architects, studios and architecture collectives from around the world, was also announced.

Last year Royal Academy appointed Vicky Richardson head of architecture and a dedicated architecture room was created at the institution as part of the David Chipperfield renovation in 2018.