London's Royal Academy of Arts has named Spanish artist Cristina Iglesias the winner of its 2020 architecture prize for her urban sculptures in public spaces.

This is the third year the 2020 Royal Academy Architecture Prize has been awarded. Previous winners are Diller Scofidio + Renfro founders Elizabeth Diller and Ricardo Scofidio, and Japanese architect Itsuko Hasegawa.

Iglesias, who is based in Madrid, produced a series of works called Rivers and Public Spaces between 2006 and 2018 that used water suspended on organic textures cast in metal to reflect the city around them.

She designed Forgotten Streams, the bronze water feature outside the Foster + Partners-designed Bloomberg London headquarters, which resurrects a lost ancient river that used to flow though the site.

"Successive generations of urbanists and artists have enhanced open civic spaces with public art in the form of statuary and fountains," said Norman Foster, the founder of Foster + Partners, who chaired the awards.

"The Royal Academy Architecture Prize pays homage to that enduring and vital tradition in its choice of Cristina Iglesias."

The jury of the 2020 Royal Academy Architecture Prize also included Alan Stanton, co-founder of Stanton Williams, the artist's Jane Wilson and Louise Wilson, the architect Anupama Kundoo, and Ricky Burdet, professor of urban studies at the London School of Economics.

Iglesias uses materials such as steel, water, glass, bronze, concrete, mirror and straw to realise her architectural sculptures, which often take the form of suspended pavilions or dried-up riverbeds.

Her piece Deep Fountain is a sculpture of a pool cut through with an abyss made from plant forms cast in bronze on the Leopold de Waelplaats in Antwerp. A timed mechanism drains the pool down the crack before it rises again to form a still mirror over the abyss.

She often works in tandem with architects. As well as the piece for Fosters + Partners' Bloomberg building, she designed a piece for the Norman Foster foundation in Madrid called The Ionosphere (A Place of Silent Storms).

Her piece Desde lo Subterráneo is by the Centro Botín art gallery in Santander, which was designed by the Italian architect Renzo Piano.

She created the piece for Doorway-Passageway for Spanish architect Rafael Moneo's extension of the Museo del Prado in Madrid. 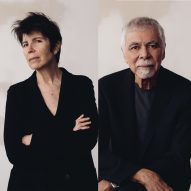 The artist said she was happy with the honour bestowed by the Royal Academy of Arts (RA) "because it values what I believe is the integral role of sculpture in the city, in the public space".

"I am interested in the crossings between architecture and sculpture," she said. "Creating spaces and moments for contemplation and reflection in the midst of contemporary urban life."

Foster and his jury also chose the four finalists for the Royal Academy Dorfman Award, which recognises future talent in architecture from around the world.