Designer Olalekan Jeyifous argued that the African diaspora is futuristic during a panel talk on afrofuturism, art and design hosted by Dezeen in collaboration with NeueHouse.

"Those who were brought to the Americas and enslaved, every single thing that we have created has been a new thing, because there just simply wasn't a precedent for it," he said.

The talk was the second part of Building the Future, a series hosted by Dezeen in collaboration with NeueHouse throughout 2022 which will explore what comes next in art, architecture and design.

Jeyifous is a Brooklyn-based artist and designer who examines the relationship between architecture, community and environment.

His work covers a variety of mediums, including photomontage, sculpture and large-scale installations. He has previously exhibited at the Studio Museum in Harlem, Museum of Modern Art, Vitra Design Museum and Guggenheim Bilbao Museum.

"We had to draw on our past and our traditions – from the music, to the food, to the clothing, to even systems of behaviour and mannerisms and everything in education, it was all completely new," said Jeyifous.

"So there's probably no one more fundamentally futuristic in terms of actually building something new than those who are part of the African diaspora" he noted.

Speaking at the talk, Jean-Louis interrogated the popular Western conception of the future and sci-fi aesthetic.

"There's this idea that if you can afford or have access to all of the technology, then you are part of that science world, right?" she said. "And I beg to differ."

"I think that black communities have been ignored for so long, because we've had to actually create things out of nothing," she continued.

"Is it about having the best technology within your world? Or is it the ability to create something out of necessity, which people have been doing for a very long time?"

Jean-Louis is a conceptual artist. Her work uses antique imagery to unpack representations of black women throughout history. Jean-Louis often works with textiles, and in a recent series of works created several elaborate baroque-influenced dresses made entirely out of paper.

The panel also discussed the importance of recognising the contribution of the African diaspora to contemporary art and design.

In the wake of the Black Lives Matter protests, Dixon sought to provoke wider discussions about race and colonialism's legacy within the design world.

Dixon co-founded TRNK, an online curatorial platform and design retail shop, in 2013. Based in New York, the brand offers a selection of thoughtfully curated furnishings and design pieces, with a particular focus on minority and LGBTQ+ creators.

TRNK's digital exhibition, named Provenance, set out to represent how the historical contributions of BIPOC communities, and particularly the African diaspora, have been marginalized, whitewashed and tokenised.

"The influence of African works to modernism and Western visual language was so pervasive – it completely changed how the Western world thought about form and geometry," said Dixon.

"But even the value of these particular works, the monetary value, was based on its legacy of white ownership. Because no provenance was given to any of these works."

"African works were just treated as little ethnographic trinkets. And it wasn't until  Picasso got his hands on a Fang mask, that all of a sudden, there's this new ascribed value to it" he continued.

"So we were challenging a lot of these designers to interrogate the references more deeply." 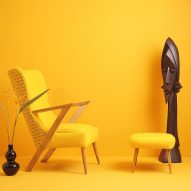 "It is about unpacking these legacies and hopefully starting to build a new canon of African-inspired work that can exist outside of this legacy of colonialism," said Dixon.

"If we're not careful, then it becomes a pigeonhole."

Answering questions from the live audience at NeueHouse Madison Square, the speakers also touched on the limitations of the label of afrofuturism.

Jean-Louis noted that the term could be used to minimise black artists.

"At the end of the day, if we're not careful, then it becomes a pigeonhole," she said. "It becomes something that you're lumped right into, that you may not necessarily want to be known by."

"And so I just think that as safe as it can be, we have to be vigilant, we have to be careful, we have to be wise, in constantly expanding on what that safe space means and looks like, and who controls that," Jean-Louis added.

"When I showed Shanty Megastructures in Lagos, Nigeria, I gave a talk to architecture students at UNILAG. And one student got up she just completely eviscerated me" said Jeyifous.

"Another student jumped up and said, Why do you think this is ugly architecture? He's like, for me, this uses local materials, organic materials...[It's] more connected. So he was like, we have to interrogate ourselves why [we think that]," he continued. "It really did generate a very heated conversation."

"I have to think of what I'm doing and who the work is speaking to, and what exactly, it's saying. It's a constant evaluation and revaluation of these kinds of works," he added. "That I think is very important."

This talk was filmed by Dezeen for NeueHouse as part of a partnership. Find out more about Dezeen's partnership content here.