Celebrity Cruises has tapped several well-known designers for the interiors on board its newest vessel, which include a sunset lounge by Nate Berkus and bedroom suites by Kelly Hoppen.

The Celebrity Beyond, which completed its maiden voyage around Western Europe this spring, is the third in the Miami-based company's Edge series of cruise ships.

Spaces unique to this 1,073-foot (327-metre) vessel include a larger, updated version of the outdoor Sunset Bar, which enjoys almost 360-degree views from an upper deck at the back of the ship.

Here, American interior designer Nate Berkus aimed to create a laid-back atmosphere for guests wishing to enjoy cocktails after spending the day at the pool.

"I'm always inspired by my own travels and in this case, it's the international beach clubs I've been to in places like Mexico, or Europe," he told Dezeen. "They always feel so effortlessly chic, and casual. The opposite of fussy."

The main entrance to the bar is through a plant-covered pergola that frames the gently sloping walkway leading down to the deck. 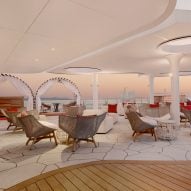 This curves around a series of seating niches and planters before reaching the covered area where drinks are served.

An arched colonnade and patterned floor tiles give the bar a Mediterranean feel, which is continued to the outdoor seating through custom Kravet fabrics based on Ancient Greek motifs.

The Celebrity Beyond joins the Celebrity Edge and Celebrity Apex in this class of vessel, which first launched in 2019, and is the largest of the three – accommodating up to 3,260 guests.

The trio share many of the same design elements, including the 1,646 bedroom suites and staterooms by British designer Kelly Hoppen that feature neutral decor with red and orange accents.

Hoppen also designed the ship's rooftop garden, its spa and The Retreat – an exclusive section for suite guests that includes private spaces like a lounge, a sundeck and a restaurant called Luminae.

"The Retreat deck and resort deck have been designed in a way to allow for a multifunctional space, by creating private pods and moments alongside the busier areas, allowing all to enjoy," Hoppen told Dezeen.

Another of the ship's features is the Magic Carpet: a deck cantilevered from the side of the ship that travels up and down at different times of the day.

A bright orange structure supports a bar and lounge, where guests can take in uninterrupted ocean vistas.

Among the other spaces to eat and drink on board are Eden, which has a garden-themed design by Patricia Urquiola, and the World Class Bar with its dark beige and brass decor.

Le Voyage restaurant offers a menu created by chef Daniel Boulud, while the Grand Plaza at the heart of the ship serves martinis beneath a giant light sculpture programmed to sync with the music.

British architect Tom Wright, best-known for designing the Burj Al Arab hotel in Dubai, was the principal architect for the ship.

Celebrity Cruises frequently taps well-known designers like Berkus and Hoppen in a bid to attract younger generations to luxury cruising.

"We really wanted to embrace the challenge of getting the younger demographic onto these glorious ships along while not isolating the older generation and current clientele," said Hoppen.

"With that in mind, we have made sure that we have given a fresh feel to the accommodation while keeping the key elements the same but with a modern twist."

The Celebrity Cruises fleet also includes the Celebrity Flora, which sails the Galápagos Islands and was designed by BG Studio and has a reptilian theme.

The cruise industry was hit hard by the Covid-19 pandemic, but has bounced back following strict vaccination and testing policies.