Pugh created a range of designs for the latest venture for the Virgin travel brand that draws on the romantic past of cruising holidays on ocean liners.

The crew kit includes a shirt with an angular graphic that looks like a stylised sailor's necktie and a black dress with a dramatic red cape.

Other dresses include one with a angular boat neck and thick black straps and another that is an asymmetric smock dress, both in the Virgin brand's signature red.

Pugh has also designed a uniform featuring a black harness that loops over the shoulders, crossing over at the back to form a belt around the hips, which looks like a cross between a utility belt and bondage-wear.

Virgin Voyages is a new "adult-by-design" cruise line that will sail under the ethos of "No Kids. No Kidding". The company's first cruise ship – christened Scarlet Lady – will launch in spring 2020.

Pugh, who described his SS19 fashion show as "anarchic and fiercely confrontational", did away with standard cruise uniform conventions such as ties and waistcoats, and eschewed epaulettes for denoting rank. 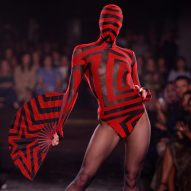 "For this project, we were really allowed to push the boundaries, and to redefine the idea of what constitutes a uniform," said Pugh.

"We ultimately wanted to make everything about it modern, luxurious and desirable."

The uniforms will be paired with a gender neutral red trainer by PLAE for all crew members to wear, instead of the red high heels that are often paired with other Virgin uniforms.

PLAE designed the shoes to have environmentally friendly linings made from coffee grounds.

British designer Tom Dixon has designed interiors for the cabins of Scarlet Lady, which are called Rock Star Suites. There are eight types of room design including the Massive suite, which comes with electric guitars.

Holiday-makers will be able to take advantage of amenities such as an overnight swimsuit drying service and a rooftop nightclub.

Interiors to the Virgin Galactic Gateway to Space building in New Mexico have also been revealed this week, featuring desert-toned decor.

Photography is by Rob Rusling.