Swiss design and branding consultancy Brand New World has launched Hidden Sound, a flat speaker that it claims is the thinnest in the world.

Designed as an antidote to boxy traditional speakers, the rectangular speakers generate sound via an ultra-thin sandwich of foam and balsa wood instead of a bulky driver.

Hidden Sound, launched at Milan design week this week, features two Bluetooth speakers that attach to a subwoofer with an inbuilt amplifier.

"Through their pared-back aesthetic and material palette, Hidden speakers celebrate the timeless, essentialist design ethos of Bauhaus icons," said Brand New World founder Jovan Jelovac, who claimed the speaker was "the thinnest it the world".

"You can literally make it disappear psychologically," he told Dezeen. "They're so non-intrusive within the home environment."

Alongside looking discrete, the sound system is designed to disperse sound around a room in every direction, making it difficult to establish its source.

The designers worked with engineers to implement distributed-mode loudspeaker technology – a technology developed in the 80s that allows sound to be produced through the distribution of vibration modes in a panel, rather than pumped in one direction as it is in traditional sound systems. 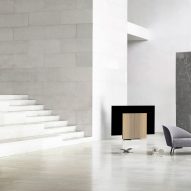 "For 100 years, speakers created sound by pumping air by a recoil system – where you have a small box and then something pumping the air – so you had a direction of sound," Jelovac explained.

"This is a completely new level, how the molecules of sound are being generated and dispersed into the world – it's 360 degrees, omnidirectional sound."

According to Jelovac, the exact thickness and length of the panels are what makes the sound "omnidirectional".

"The ratio is the golden ratio. We tried to make it sound like this as a square, as a triangle and in some funky design but it did not make music as God intended it to sound," he said.

Other minimalist speakers include the Beosound Edge speaker by designer Michael Anastassiades and Bang & Olufsen's  Beosound Emerge which is meant to be able to slot into a bookshelf.

The images are courtesy of Brand New World.