Bang & Olufsen has unveiled its Beovision Harmony television, which can fold down into a sculptural form when not in use, at Milan design week.

The Beovision Harmony sits low on the floor, with two oak and aluminium covers partially obscuring the black screen.

When the TV is turned on, these panels fan out "like a butterfly opening its wings" and the thin OLED screen rises above them, to what is described as a perfect viewing height.

Like Samsung's 2017 Frame television and LG's rollable television, the Beovision Harmony is designed to blend into the decor of a living space and eliminate the black void of the screen.

"The presence of a big screen is rarely a welcoming addition to living spaces," said Bang & Olufsen executive vice-president of brand and markets John Mollanger.

"With Beovision Harmony, we wanted to create a meaningful object for interior that reduces the visual presence of the TV and transforms it into something that people will develop an emotional attachment to."

The Beovision Harmony's panels also contain the sound system, and the grading pattern on the front is actually designed to optimise acoustic performance.

The launch of the television continues a trend for invisible technology that blends into the background. Panasonic is also displaying a prototype in this vein at Milan design week; its Vitrine TV looks like a glass cabinet when not in use.

So far designers have taken several routes to making the TV disappear. While LG's rollable television can be stored out of sight in its base unit at the click of a button the others have taken two distinct approaches. 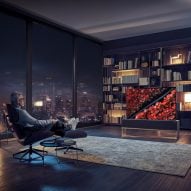 With its concealed screen and sculptural form, the Beovision Harmony somewhat blends these two approaches.

While Samsung is arguably a pioneer in this genre of television set, Bang & Olufsen sees the Beovision Harmony as a continuation of long-practised design principles rather than a response to a trend.

The company points to its 1959 Capri TV as a particular inspiration. The teak wood product was designed to "fully integrate" with the living rooms of the time.

A future iteration, the Capri 611 FM Television, also contained a radio, all fully disguised as a wood cabinet when not in use.

Bang & Olufsen is showcasing these designs and others in an exhibition at Milan design week titled 93 Years of Magic: A Dialogue Between Past and Present from 9 to 14 April.

"We have been sharing an obsessive passion for almost 100 years, and it has been a mission of ours to perfect the techniques used to reproduce sound and vision and to embody it in a design that people are proud to have in their homes," said Mollanger.

"Wood has always been an important aspect of Nordic architecture and furniture design because of its individual character, robustness and versatility, and we are proud to carry this forward in our Beovision Harmony."

For those less fond of wood, the Beovision Harmony is also available with two-tone grey fabric and aluminium covers. It can be placed on a floor stand or on a wall bracket.

The design incorporates a screen by LG — the 77-inch OLED C9 — along with "truly immersive" sound from Bang & Olufsen's own speakers.

Other recent products from the high-end Danish electronics company include the rolling Beosound Edge speaker designed by Michael Anastassiades and the portable Beoplay P6 speaker by Cecilie Manz with 360-degree sound.