Dezeen teamed up with luxury kitchen appliances brand Gaggenau to host and stream a talk about the design world's response to the coronavirus pandemic with Dara Huang and Michel Rojkind during Milan design week 2022.

Moderated by Dezeen's editor-at-large Amy Frearson, the talk explored how design responds to crisis with innovation, how designers can foster resilience in difficult times, and the increased interest in local manufacturing, entrepreneurship, and the design of communal and interior spaces in the past two years. 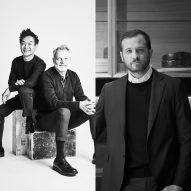 The panel featured architect and designer Huang, who is founder of Design Haus Liberty, and Rojkind, founder of Mexico-based architecture firm Rojkind Arquitectos.

The talk took place in the conservatory of Milan's historic Villa Necchi Campiglio, where the brand created a 360-square-foot interactive installation called A Statement of Form to showcase its highest-grade appliances.

Huang founded Design Haus Liberty in 2013. The studio has offices in London and Hong Kong, and was awarded three RIBA awards in its first three years as a practice.

The daughter of a Taiwanese scientist who emigrated to the USA to work for NASA, Huang has a masters degree in architecture from Harvard University. Before founding Design Haus Liberty she worked at Herzog & de Meuron in Basel and Foster + Partners in London.

Projects by Design Haus Liberty include Villa Mosca Bianca on the shore of Lake Maggiore in Italy, and a cluster of apartments in Shoreditch, London.

He founded Rojkind Arquitectos in 2002. One of the studio's recently completed projects is a concert hall on the Gulf of Mexico, built for the philharmonic orchestra of Boca Del Rio. Other projects include the renovation of Mexico's National Film Archive and Film Institute and the Liverpool Department Store.

The talk was the last in a series of three hosted by Dezeen in collaboration with Gaggenau running 7-9 June, which were all moderated by Frearson.

Yesterday, Dezeen hosted a talk about designing kitchens that form "the hub of the home", which featured a panel including Dada's director of product development Andrea Molteni and designers George Yabu and Glenn Pushelberg.

A Statement of Form is on show between 7-11 June during Milan design week, daily from 11am to 5pm. To visit, register at www.gaggenau.com. You can watch all the talks live on Dezeen here.

This article was written by Dezeen for Gaggenau as part of a partnership. Find out more about Dezeen partnership content here.