Rich colours and leather upholstery feature in this Calgary bar and restaurant that Canadian studio Frank Architecture based on author Truman Capote.

Major Tom is located on the 40th floor of Stephen Avenue Place in Downtown Calgary, affording it panoramic views of the city, the Canadian prairies and the Rocky Mountains beyond.

"Known for his biting humour, quick wit, deep insights, and ability to party harder than anyone else; [Capote] was a gourmand, a bon vivant, a savant, and he captured the voice of the era perfectly," said the studio. "Major Tom is at once elevated and approachable, playful and at ease, confident and gracious."

With the views taking a prominent role, the approach to the interior design is sophisticated and restrained.

Facing the windows, the bar counter front is inlaid with strips of marbled stone. Behind, thin gridded shelving stores and subtly illuminates the liquor bottles.

Along the glazed facade stretches a black tufted leather bench, which sits low to avoid obstructing the view.

Two-top stone tables and rust-coloured armchairs follow the bench parallel to the bar, leading to a lounge area with dark grey and russet decor. 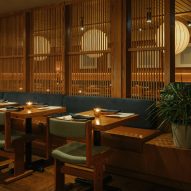 "The lounge is sexy and mysterious," said Frank Architecture. "Plush bespoke seating, rich tones, warm leathers, and dark wood lure you in for cocktails and conversations."

On the other side of the bar, dining space for larger parties features leather chairs paired with wood-topped tables.

A library wall at the back displays assorted books and objects within softly lit alcoves.

The cast concrete ceilings of the 1970s tower are left exposed, with amber-toned mirrors and cove lighting installed within the raised trays.

Low lighting, bold artworks and dark colours throughout all add to a mood and atmosphere that evokes the glamour of the 1960s.

Frank Architecture is based in Calgary, and also designed the interiors for Japanese noodle bar Lonely Mouth in the city.

The photography is by Chris Amat.