Seventies decor, French bistros and indigenous flowers are some of the references design studio Luchetti Krelle has mixed inside this bar in Sydney, Australia, which occupies a converted butcher.

Serving local wines and small plates, Jane is meant to be the more casual counterpart to Arthur – a nearby restaurant offering only five-course tasting menus.

Both venues are run by chef Tristan Rosier and are named after his late grandparents.

The building now housing Jane originally served as a butcher but was subsequently reincarnated as various eateries, which made it in desperate need of a revamp, according to Luchetti Krelle.

The studio made some minor tweaks to the building's tiled facade, restoring the brass framework and replacing its tinted windows and door panes with clear glass to allow passersby to look inside.

A section of the butcher's original gold-leaf signage was also carefully preserved.

A cosy dining area fit for eight guests was created beside the entrance, featuring a curved seating booth and a Rosso Levanto marble table with a built-in Lazy Susan. Overhead dangles a vintage chandelier, its ornate design reflected in the mirror-clad walls.

A banquette runs the length of the bar on the right-hand side, its backrest upholstered in caramel-coloured corduroy as a subtle tribute to the 70s-style interiors found in the former home of Rosier's grandparents.

The banquette is accompanied by a series of bespoke wooden tables with slanted corners so that even when the bar is busy and guests are in closer proximity, they can't bump into any sharp corners. 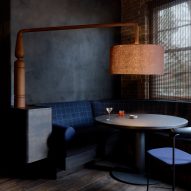 Four Pillars Laboratory in Sydney is a "sanctuary" for gin enthusiasts

On the opposite side of the room is a brass-edged drinks bar finished with a Carrara marble countertop.

High stools upholstered in butter-yellow leather stand in front of the bar, framed by a tiled floral splashback that's meant to be loosely reminiscent of a Parisian bistro floor.

Prior to Luchetti Krelle's intervention, the interior featured a "cold" black-and-white paint scheme. So the studio was keen to introduce some bolder colours – particularly those synonymous with the Australian bush.

The existing concrete floor was coated in eucalyptus-green paint while the ceiling was finished with a natural red fibre that's similar in hue to the indigenous Waratah flower.

Just beneath the ceiling is a sequence of custom shelves, just high enough to fit a typical wine bottle.

Corduroy seating and Rosso Levanto tables were installed in Jane's narrower rear dining room to create an aesthetic connection to the rest of the bar.

From here, diners can access the bar's private courtyard and the toilets, which take over the butcher's former salting room.

This space was previously accessed via a short flight of steps. But the floor was raised to meet the level of the front room and further enhance the sense of continuity.

A new skylight and glazed panel in the back door help illuminate the space, while a false ceiling was knocked through to make the walls appear taller.

Luchetti Krelle was established in 2008 and is led by Rachel Luchetti and Stuart Krell.

Jane joins a multitude of bars and restaurants in Sydney, which is known for its vibrant dining scene.

Other examples include moody gin bar Four Pillars Laboratory and Glorietta, an airy Italian restaurant decked out with timber and rattan furnishings.

The photography is by Anson Smart.