Designer Kickie Chudikova has filled a room at Milan design week with kaleidoscopic furniture and lighting informed by the appearance of insects to promote the importance of biodiversity.

As Chudikova's debut installation, the project is called Insectum, which means "cut up or divided into segments" in Latin.

Insectum comprises six limited-edition pieces of furniture and lighting by Chudikova that are on display at an exhibition at design platform Alcova in Milan.

The pieces intend to mirror the intricate shapes and colours of many insects in order to draw attention to their fragility and the threats they face from climate change, according to the designer.

Arranged in a living room-style formation, the work includes Alvea, a squat, bug-like yellow chair with a bobbly armrest that is reminiscent of antennae.

Calidea is a multi-hued carpet with rounded edges and a geometric pattern that hangs on a wall, while a bulbous acrylic glass and steel mini bar called Orbis sits in the corner of the room.

The carpet is made from all-natural materials and was hand-tufted in India by Sukhi Rugs. It is named after Calidea dregii, which is also known as the rainbow shield bug.

Orbis was created as a contemporary interpretation of a 16th-century globe bar. It features a scent-diffuser that releases an aroma created by Alessandro Gualtieri of perfume brand Nasomatto, which was informed by petrichor – the smell produced by rain falling on dry soil.

"The colours were strongly inspired by the natural world and how vivid some patterns of the insects are," Chudikova told Dezeen.

"Colour brings an emotional layer to a project, as it influences us on a deeper level. I think we should have more courage to live with colour." 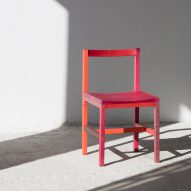 The Elytra windows are two striking, stained-glass arched openings that refract colourful light into the space, which is illuminated by a pendant lamp from above.

Elytra is the Latin term for the hardened wing of an insect, while the lamp is called Fovea after the name for an area of the eye that provides greater visual accuracy than the rest of it.

"The window frames are 3D-printed on large-scale printers, which I believe is a sustainable way of producing things on demand, made to measure, without extra production waste," explained Chudikova.

An augmented reality experience is also included in the installation, where visitors can view the furniture and lighting in a lush virtual jungle. The pieces are also for sale as NFTs on digital auction platform Foundation.

Insectum aims to combine Chudikova's life-long fascination with insects with a message about their importance – according to a scientific report published in 2019, over 40 per cent of insect species are threatened with extinction.

"Many people don't realise the role insects play in our ecosystem and the enormous economic importance of more than a million species," reflected the designer.

"Often ignored or perceived as a nuisance, I wanted to highlight and celebrate their beauty as a way to protect them and find a new appreciation for them."

Chudikova is a product and furniture designer based in Brooklyn, New York, whose work is often characterised by colour. Other installations currently on display at Milan design week include psychedelic modular seating by Khaled El Mays and glowing, lantern-like water towers by Hermès.