Among the hundreds of brands gathering in Milan to show their latest products this year, there were a notable number of Japanese brands aiming to enter the Italian and wider European market.

New brand Koyori chose the city for its overall launch, while it was furniture brand Ariake's Italian debut and the first time that Tajimi Custom Tiles showed in Europe.

Also in Milan was Karimoku Case Study, a sub-brand from Japanese brand Karimoku. Its stand at Salone del Mobile marked the first time that the brand had shown at the fair.

Ariake took over an architect-designed private apartment in Milan's Porta Venezia area to present the Cipango exhibition, which marked the brand's debut at Milan design week.

Ariake, which was founded by two Japanese furniture factories, wanted to show in Milan as the brand has worked with Italian producers for the first time. This was due to a lack of hardwood in Japan.

"Looking at the global situation in the world today, it doesn't make sense to send wood from North America or Europe to Japan, make furniture and then send it back," Tan told Dezeen. "We don't think it's very sustainable."

"Japanese woods are mostly soft woods, like hinoki or cedar," he added. "Local hardwoods are usually pretty small trees and it's also very expensive, because they're very limited stock. Most Japanese furniture companies actually use imported oak or ash."

Instead, the brand has now partnered with local factories in northern Italy and plans to scale up its production in Europe.

"We're talking about Japan as a state of mind, as a concept," Tan said. "That doesn't have to mean that things have to be made there."

With a brand identity created by British designer Jasper Morrison and graphic designer Sebastian Fehr, and a debut collection of chairs by French designers Ronan and Erwan Bouroullec and design studio GamFratesi, the brand has an international approach.

Launching at Milan design week was a decision that the brand made based on the size and importance of the event.

"It is important that Koyori launches in an international event, and Milan design week is one of the largest events that attracts huge numbers of international visitors in the design fields," Koyori CEO Koda Munetoshi told Dezeen. 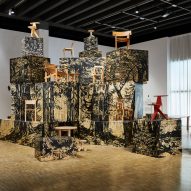 He believes that by launching Koyori in Europe, the brand will be able to help other Japanese companies reach a global audience.

"Japanese aesthetics of simplicity, usability and beauty have been more and more appreciated by the European market nowadays," Koda said. "There are many international designers who work with Japanese manufacturers are well."

"There are still many manufacturers in Japan with excellent manufacturing capabilities, but it is really unfortunate that they have not had the opportunity to expand overseas due to the lack of necessary know-how and language skills," he added.

"Koyori would like to offer the expertise in branding, marketing, logistics, language support, and design strategy to introduce Japanese manufacturing to the world in the best possible way."

While most of the Japanese brands showing in Milan had chosen to be a part of the design week, Karimoku Case Study took a stand at the furniture fair itself, Salone del Mobile.

The company's parent brand, Karimoku, has shown at Milan design week before, but this marked the first time that it showed at Salone del Mobile.

Japanese designer Keiji Ashizawa built a Japanese-style home at the fair together with Danish architects Norm Architects. The designer and studio work together under the moniker Karimoku Case Study.

The stand's muted beige, white and grey hues stood out against the more traditionally colourful stands surrounding it.

"One of the things that we tried to work with when we created the whole philosophy behind the brand [is] that you should experience your home as a sanctuary where you need to find balance and be comfortable," Norm Architects partner Frederik Werner told Dezeen.

"I think the more colours, the louder you scream, quickly becomes too much for your senses," he added.

Its creative director, David Glaettli, is also the creative director of furniture brand Karimoku New Standard, an example of the crossover between the Japanese brands that were showing in Milan. 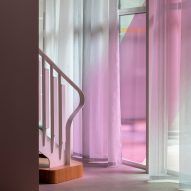 Many of the brands are working together and sharing their knowledge, with Karimoku Case Study's Ashizawa and Norm Architects also showcasing new furniture as part of the Ariake exhibition.

"The owners of Ariake and Karimoku, they all know each other," Ariake's Tan said.

"So I think there is a lot of collaboration and friendship and I've attended Karimoku dinners because I happened to be at their show," he added.

For the Japanese brands entering the European market, it's a case of "friendly competition," he added.

He believes the time might be right for Japanese brands to become more ubiquitous in Europe, something he says coincides with a generational shift in the way companies in Japan are run.

"Hopefully, this is the time for Japanese brands who haven't had a lot of success in the last 20 years of trying to export," he said.

"Younger generations of Japanese brand owners are taking charge, compared to 20 years ago. They are more daring."

Among the other brands unveiling collections at Milan design week were designer Lara Bohinc, who showcased a voluptous seating collection, and Italian brand Alessi, which celebrated its centennial.