The American Institute of Architects has appointed Kimberly Dowdell as president of the organisation, making her the first Black female architect to lead the institution.

Succeeding Emily Grandstaff-Rice, Dowdell will become the 100th president of the organization and the first Black woman architect to serve as the elected president.

Dowdell aims to be "AIA president for all"

"As the 295th living Black woman to earn an architectural license in the US, I am keen to help young women and people of colour," said Dowdell.

"Please know that I am not asking for support in this endeavour because I am a Black woman, but rather because I have a proven track record in excellence in leadership within our profession," she said in a video made prior to her election.

"I do believe that representation matters and I would be honored to demonstrate a new set of possibilities for young women and people of colour, in particular."

Dowdell also made clear that she wants to be the "AIA president for all" and said that she will be a spokesperson for the entire membership.

"I fully believe that the AIA has the power and potential to better serve our profession," she said.

Presidency to focus on areas including climate change and advocacy

Her platform includes a focus on advocacy, belonging, climate change and navigating the future of architecture in a time of technological advances.

Dowdell said that she would bring her experience in public and private practice and her expertise in public administration to the policy-making body at the American Institute of Architects (AIA.)

"I believe that buildings are very much part of the public realm," she said. "And I am committed to helping my fellow architects and allied professionals to better protect the health, safety and welfare of the public." 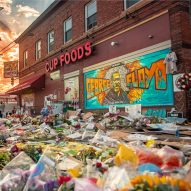 Dowdell has participated in roles at the AIA in the past, volunteering on the New Urban Agenda Task Force as well as the Equity and the Future of Architecture Committee.

She was elected as president of the National Organization of Minority Architects (NOMA) in 2019 and is the co-founder of the Social Economic Environmental Design (SEED) – an organization that supports community-building projects.

"Her whole life has prepared her for this"

Dowdell has previously spoken about her "improbable" journey to becoming an architect.

"My journey from very humble beginnings to a dynamic career in architecture is highly improbable, but that's what's so special about being an architect," said Dowdell, who grew up in Detroit before attending Cornell for a bachelor in architecture and Harvard for a masters degree in public administration.

"Kimberly is the right person at the right time to serve as AIA president," said Riccardo Mascia, HOK's managing principal in Chicago.

"Her whole life has prepared her for this. I have no doubt that she’ll lead the AIA’s membership and our entire profession toward a more inclusive, impactful future."

The AIA also announced that Britt Lindberg has been appointed AIA Secretary for 2023-2024, while Illya Azaroff was named At-large director for 2023-2025.

In the UK, Ingrid Schroder was recently named director of the Architectural Association, the second woman to ever hold the post, while in the US, Crystal Williams has been appointed the first Black president of Rhode Island School of Design.

More stories from the AIA