Architecture studio MAD has completed its first social housing development, which consists of 12 residential buildings in Beijing connected by raised walkways and a "floating park".

Named Baiziwan, the development near the Central Business District in east Beijing is divided by roads into six areas that contain multiple apartment blocks.

The blocks were built around green spaces, which are connected by raised walkways.

"[It is] very different from commercial housing, the apartment size is much smaller in social housing and you also have to control the cost," said MAD founding partner Ma Yansong.

"By opening up the complex, increasing green space and vertical layout, it helps to improve people's sense of space."

The complex contains a total of 4,000 apartments. The blocks were arranged in groups of three that spring from central towers and stagger down in height to create hill-like forms.

A looping red walking and running track on the first floor was designed as a floating park that connects all the residential areas by bridging over roads. Embedded in this communal space are gyms, a badminton court, children's playgrounds, an eco-farm and a service centre that are only accessible to residents.

Within the Baiziwan buildings, there are six different apartment types that range in size from 40 to 60 square metres. Communal corridors were placed on the north side of the buildings with the aim of increasing the amount of daylight the apartments receive.

This resulted in 47 per cent of the space being covered in greenery – a number that is much higher than for the average social housing complex in a densely populated city centre in China. 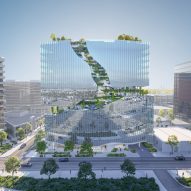 MAD aimed to design the development so that residents could use the various communal space as they see fit.

"In this project, form is not my priority because we want to give the diverse use of space back to its residents," said Ma.

"The use of industrialised prefabricated construction restrained the project’s shape and structure, making it difficult to express any artistic form, but helped to speed up the construction."

MAD was commissioned by Beijing Public Housing Centre to design the project in 2014, with construction completed in 2021.

While this is the studio's first social housing development in China, MAD previously designed a 13-storey residential building in Paris, called UNIC.

It was UNIC that inspired the studio to tackle social housing in China. Pushed by the commercialisation of the housing movement in the 1990s, the same mega-size closed residential complexes that were first developed in the 1950s have been the standard housing in China to this day.

Ma is hoping that Baiziwan will help increase diversity in the country's housing design.

"The biggest problem of China's housing is homogenisation," said Ma. "Residential complexes all over China look the same, as well as the apartment configurations."

"A little change will be seen as a huge challenge to the status quo," he added. "I hope Baiziwan will be our effort to a more diverse residential housing scene in China."

Baiziwan's current occupancy rate is over 70 per cent, and it is estimated over 8,000 to 10,000 people will be living here once the development is fully occupied.

Dezeen's founder and editor-in-chief Marcus Fairs will be in conversation with Yansong Ma to discuss more details about this project on 24 June this week, as part of a series of talks and panel discussions about social housing in China and around the world, in partnership with MAD. Each discussion will be broadcast live on Dezeen.

Other recent projects by MAD include a cloud-like white museum on the coast of Haikou in China and a Beverly Hills residential block with a large green wall.