Connecticut-based studio Becker + Becker, which bought the building from IKEA in 2019 after it had sat unused for more than twenty years, retained the facade of the Breuer-designed structure while updating the interiors.

Now named Hotel Marcel in honor of the original architect, the 165-room hotel opened in May 2022 under the Tapestry Collection by Hilton Hotels.

Acting as both architect and developer, Becker + Becker renovated the building over the past three years removing asbestos from the former office building and repairing its facade.

The distinctive form of Breuer's original design – a wide structure with a void in the middle supported by columns so that the top floors and lower floors are divided into two sections – was retained.

Externally the structure appears how Breuer designed it except for a section of the building that was torn down by IKEA in order to build a parking lot.

According to Becker + Becker president Bruce Becker, the project had two main aims – on the one hand, preservation of the landmark structure, and on the other finding ways to make the building more sustainable.

"With the climate crisis we're facing, there's a realization that it's really hard to justify building a new building," Becker told Dezeen.

"Poured-in-place concrete walls and precast concrete panels are typically easier than other wall systems to seal and make airtight to reduce infiltration."

More than one thousand solar panels completely power the structure and were even used to provide electricity for the final stages of construction. The solar panels cover the roof and an additional solar field near the hotel.

The studio made several other interventions including opening up utility spaces at the centre of the top floor – a double-height space supported by steel trusses – to create a courtyard that lets in light for a series of meeting rooms.

This opening also allowed the architecture studio to build light wells that bring in additional light to rooms that were placed at the middle of the floor plates.

The hotel's interiors were designed by Brooklyn studio Dutch East Design, which turned the offices and research labs into 165 luxury rooms as well as lobbies and amenity spaces.

Since much of the original interiors were unusable, the renovation was intensive and Dutch East brought in furniture from a number of local craftsmen.

To pay homage to the exterior, the interior designers included a terracotta frieze in the lobby that resembles the precast concrete panels on the exterior facade.

Minimal furniture and white walls with wood finishes characterize much of the public and private spaces of the hotel.

Designed by Breuer, the building was originally completed in 1970 as the offices for Armstrong Rubber Company.

It was turned into the North American headquarters of tyre company Pirelli in 1988, who then left the building unoccupied until 2003, when it was purchased by Swedish furniture giant IKEA.

Breuer was one of the 20th century's most significant architects who was awarded the AIA Gold Medal in 1968.

A master at the Bauhaus, he fled Germany to London as the Nazis gained power and subsequently moved to USA where he designed over 100 buildings including New York's Whitney Museum of American Art.

In 2000 the the brutalist office was declared historically protected through the efforts of the New Haven Arts Council's Alliance for Architecture. 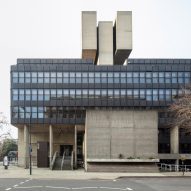 "Brutalist buildings like the Pirelli building are works of art that can inspire and elevate the quality and meaning of our daily lives," said Becker, whose studio has restored a number of mid-century structures throughout New England.

"It is hard to place a value on that but it is fundamental to our humanity."

Other Brutalist structures that have been renovated for new use include Georges Batzios Architects' renovation of an office building in Greece. In Canada, ERA Architects turned a mid-century apartment building into the world's tallest retrofitted Passivehaus structure.

The photography is by Seamus Payne.