Architecture firm Estudio MMX has spread CAB House in Mexico City over four levels by using a series of towering volumes to integrate the building into a steep site.

The project was designed for a site with a natural ravine at the bottom, which Estudio MMX wanted to integrate into the planning.

"A ravine with a dry creek offers a level of intimacy and contact with nature unmatched by the conditions at street level," the Mexico City-based architecture studio explained. "The project's main objective was to reach the lowest point of the terrain."

To do so, the architects designed a sequence of rooms that begins with the public areas near the top of the the 466-square-metre home, where visitors enter from the street. Four distinct levels cover the 16 metres that separate the top from the bottom of the sloped lot.

Four polyhedral volumes were were arranged around a central stair. The volumes rise from a base and have sides that are parallel with one another.

At the highest level of the building is a home office, which is accessed from the exterior to offer it some separation from the rest of the home.

Guests enter into the living room via a concrete walkway. This area also has a small balcony that looks out onto the driveway and entrance.

A wooden staircase with open treads leads visitors down to the communal areas, which are arranged around the staircase in separate rooms.

There are interior and exterior dining rooms in addition to the kitchen and living room.

The open spaces between the black brick volumes that form the home are filled with vegetation, which helps tie the home into its lush ecological context.

"At first glance, the house has a rather introverted scheme – however, through patios and terraces accompanying the spaces in the different levels, it seeks and effectively relates to the exterior," said Estudio MMX.

On the third level down from the entrance there are the three bedrooms. Two of these share a landing, while the primary suite occupies the other half of the plan with a generous walk-in closet and a private terrace. 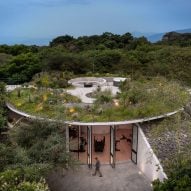 On the lowest floor, the interior spaces open up completely to the landscaped backyard.

Having so many different levels in the home makes the descent from the street level to the rear yard feel like a more continuous, smooth experience.

"The house needed a sequence of varying levels that translates onto a subtle descent parallel to the natural context," Estudio MMX explained.

The structure of the home is comprised of large timber pillars and beams in certain areas, and concrete ones in others.

In either case, the architects left these exposed on the interiors, creating a visual contrast throughout different areas of the home.

Black bricks make up the exterior, which helps conceal the size and shape of the four volumes.

"The neutrality of the chosen materials, black bricks and recovered wood does not compete against the surrounding nature," said Estudio MMX.

"On the contrary, they coexist harmonically."

Certain neighbourhoods in Mexico City are built on impressive hills. Other projects in the capital include the residence of the Swiss ambassador, which features a steep and winding path down to a ravine, and a rooftop pavilion that extends a residence originally built in the 1950s.