The rise of virtual experiences and the metaverse put craft traditions at increased risk of dying out, according to designer Ini Archibong, who unveiled a hand-carved version of his glass Gaea Pendant at Milan design week.

Archibong, who has worked closely with Murano glass artists on many designs, believes it's impossible to replicate the look and feel of hand-crafted objects in virtual worlds.

"We're quickly moving to a place where the reality of experiences like this is rarer and rarer," he told Dezeen.

"If we don't pay attention to the very real world of making things with your hands, which will never exist in digital, meta anything, we could lose it," he said.

Archibong points to the latest version of his Murano glass Gaea Pendant – which is being produced in a limited edition of 10 by collectible furniture brand Sé – as an example.

The designer described the production of this piece as "a visceral experience" that could not even be replicated by machine production, let alone in a digital space.

The intricately detailed glass light is the product of highly skilled blowing, carving and etching techniques that can only be found on the Venetian island.

The first of the 10 pieces, which debuted as part of Sé's 1970s-influenced exhibition at Spazio Rosanna Orlandi, combines four different pattern effects in a finish that is distinctly tactile.

"A person can't just pull up to Murano and just get work like this done," Archibong said.

"It takes years of spending time there, analysing the work and looking back at the history," he said. "I wouldn't know how to employ Murano glassmakers without years of studying their craft."

Murano's tradition of glassblowing dates back as far as the eighth century, but became prominent in the 13th century when the production of glassware became Venice's main industry.

The skills have been passed down through generations, but many remain closely guarded family secrets.

With the demand for glass art declining and young glassmakers increasingly hard to recruit, Murano's glass traditions have long been at risk of dying out. The number of Venetian glassmakers dropped from 6,000 in 1990 to less than 1,000 in 2012, according to the Guardian.

"I take it quite seriously, because who knows what will happen," said Archibong.

"As long as I still have the ability to work in Murano and make glass, I'm not going to pretend like it's not a possibility that there's only a finite amount of time left." 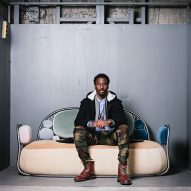 "I make emotional things with a function" says Ini Archibong

The rise of the metaverse is being fuelled by a number of factors, including the advent of cryptocurrencies and NFTs, and the increasing use of virtual and augmented reality environments.

In this context, Archibong suggested that physical crafts are more important than ever.

"With the direction we're moving in, we need to maintain our anchors in reality, not just become avatars," he said.

The designer believes the best way to support the longevity of the Murano glass industry is by exploring contemporary applications of the traditional techniques.

While he acknowledges that the craft makers are not always receptive to new ideas, he hopes the Gaea Pendant can show it is possible to collaborate with them in imaginative ways.

"The best approach to working with something as alive as glass is to just be immersed in the process," Archibong said.

"If you send a technical drawing of exactly what you want to them, you will get exactly what you drew and it will be unimpressive," he said. "But if you work with the craftsman, go through the process together, you get something amazing."

First launched in 2019, the Gaea Pendant forms part of Archibong's Below the Heavens collection for Sé. The design is characterised by a balloon-shaped pendant lamp, hanging below a chain of large beads.

Archibong and Sé founder Pavlo Schtakleff came up with the idea of creating limited-edition hand-carved version specifically to pay homage to Murano's history and engage a new audience.

"Being on that island is like being in the Marvel Universe," added Archibong. "They're all masters in very specific things. They really do have superpowers."